I love chicken broth. It adds so much flavor and nutritional value to many gluten-free recipes, and homemade slow cooker chicken broth couldn’t be easier! 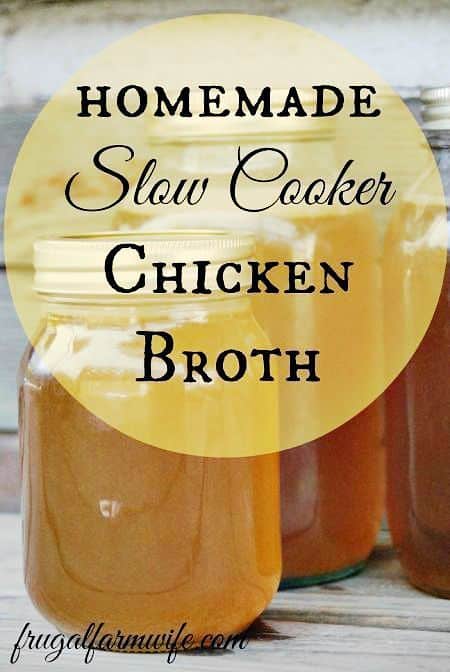 Chicken broth is an awesome addition to soups, rice, gravy, sauces… and the list goes on. And like most things, there is just no comparing what comes off the shelves, with what you can make yourself. Like homemade lunchmeat. There’s just no comparison.

Homemade chicken broth is out of this world!

But there’s something else – you can make it in the slow cooker with so little work, that you’ll never want to buy it again!

In case I haven’t said this before, I love my slow cooker! It’s like magic – you throw a bunch of ingredients in, came back later and, le poof! Dinner’s ready!

This is chicken broth, and not, strictly speaking, bone broth. However, I’ve included apple cider vinegar to help leach the minerals from the bones, just like you would in a “real” bone broth recipe, and then cooked it for nearly 24 hours – until the bones were actually soft. In my opinion, it’s the best of both worlds.

*I like to use the leafy tops from several ribs of celery since they have the same flavor, but aren’t useful in a lot of other recipes