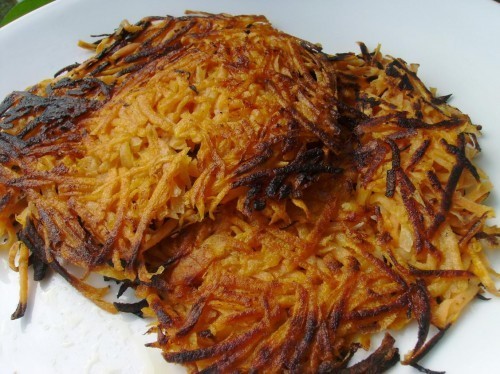 Okay, this dish may tickle your funny bone a little bit.

This past summer, we had a bazillion laying hens, and quite a stash of potatoes that we’d recently harvested, so in an effort to keep our grocery bill down, many of our breakfasts were made of hashbrowns and eggs.

Then Gabriel began harvesting sweet potatoes and I got to thinking, why not try sweet potato hash browns? It’s a little weird I admit, and yes, I know that sweet potatoes aren’t anything like irish potatoes. But still, why not? Sweet potatoes are so good for you, and it’ a nice, flavorful changes from regular hash browns.
We’ve Tried topping them with butter and cinnamon sugar (our favorite), honey, or syrup for a sweet breakfast, or just put some onion in with the potatoes for savory.

Heat a few tablespoons of oil in a skittle on medium-high.
The traditional way of preparing potatoes for hash browning is to rinse the shredded taters and spread them out on a towel. Then roll the towel up and squeeze as much moisture out as you can.
Personally, I just pick up a handful of potato and squeeze like crazy.

Once the oil is hot, spread a large handful of shredded potato into a circle about 1/4 inch thick on the skillet. 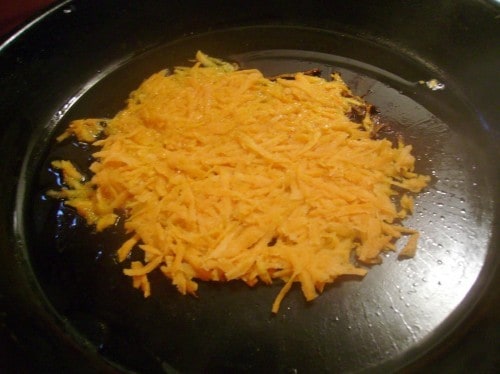 Fry until brown on one side and flip. Once the second side is brown, remove from the skillet onto a plate, and top as desired.

I find that sweet potatos are a tad harder to flip than irish, so I make them a little smaller.