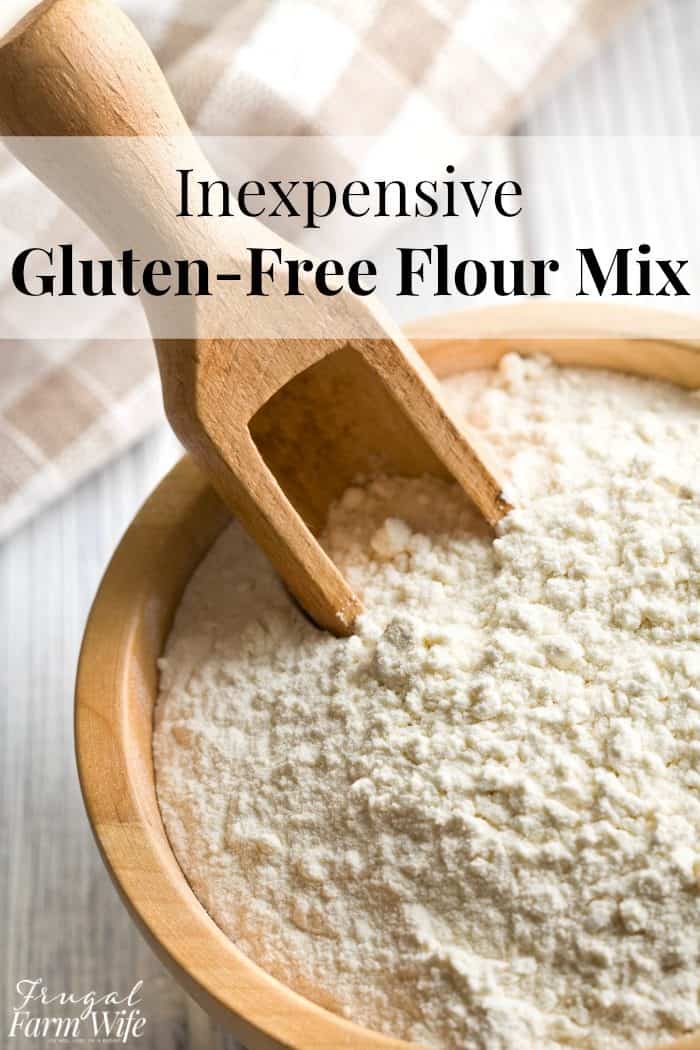 Gluten-free flour mixes are notoriously expensive. Shockingly expensive. Quite frankly, with the grocery budget I have, I simply can’t afford them.

Fortunately, making your own inexpensive flour isn’t as hard as it sounds, and with the investment of a Kitchen grain mill Mill

, it costs only a fraction of what many of the pre-mixed flours cost.

Here’s the recipe for my mix:

This is the mix I use for pretty much everything except for bread. It’s the cheapest way I can find to make gluten-free flour because all of the ingredients are common.

Brown rice can be found in nearly any grocery store. The last time I bought it, it cost roughly $.59 per pound. We’re fortunate to have friends in the middle of the Missouri farmland and picked up a couple of 50 Lb. bags while visiting them for only a fraction of that price.

White rice is also found in grocery stores, and is typically cheaper than brown rice. Again, I try to buy in bulk. Since white rice is pretty starchy, it can take the place of some of the starch, which is much more expensive than rice.

Cornstarch is the most expensive ingredient of all here, that’s why I use as little as I can. Still, at $.79 per pound, it’s much cheaper than the typical pre-mixed flour.

One tip for making your gluten-free cooking much cheaper is to switch from xanthan gum, to guar gum. I’ve read articles about which gum to use for which application but honestly, I’ve used guar gum for everything and haven’t noted a difference. Again, guar gum is only a fraction of the price of xanthan gum.

Also, you’ll note that I don’t add the gum directly to my flour mix. You can (I’ve seen recipes that use 2 tablespoons per 5 cup batch of flour), but it’s a tremendous waste. While, yeast breads, cookies, biscuits, and a lot of things do need gum to hold them together, you’d be surprised at the number of baked goods that don’t need it.
For instance, pancakes and waffles (as long as they contain eggs!), many cakes – I’ve used this recipe, with my own flour mix rather than the one suggested,  to make 9×13 cakes with fantastic results – As well as muffins and many other quick breads, require no addition of gums!
As gum is the most expensive ingredient in gluten-free baking, this is a huge money savings!

By my calculations, making your own flour mix according to the recipe I’ve provided above should cost you .34/pound. I’ve never been able to find any flour mix for less than $2.50/pound, so that’s a pretty amazing savings!

Of course you have to factor in the initial cost of a grinder. The one I have

costs $179 on amazon.com. Ouch! I typically grind five pounds of flour a per week so if I’m saving $2/pound by grinding my own flour, it would take 18 weeks for the grinder to pay for itself. That’s not bad! I’ve had this grinder for over two years, but it’s a hand down from my mother-in-law so I have no idea how old it really is. That is to say, it’s well worth the cost!