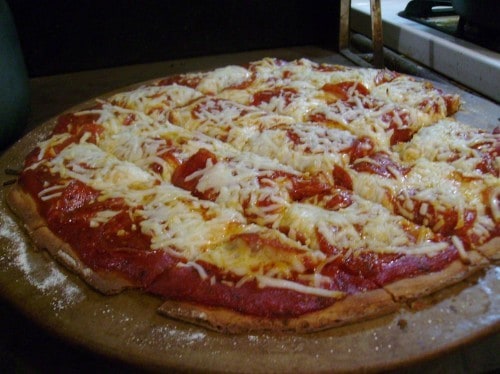 My family loves pizza. Maybe I should say that my family is addicted to pizza. Pizza Hut, Papa Johns, Hunt Brothers, Home made. If it has marinara and cheese on it, we eat it.

Imagine my disappointment when Gabriel told me that he didn’t really like pizza. I think he purposely kept that little piece of information from me until after we were married.

As it turns out, it’s not really that he doesn’t like pizza, it’s that he did like it, and ate a lot of it before he new about his food allergies. Needless to say, all that wheat laden pizza crust made him sick, and he subconsciously began to equate eating pizza with being sick. That’s why didn’t like pizza.

So anyway, I went to work on honing my gluten-free pizza crust making skills… and it quickly became the bane of my existence. All of my crust felt like rubber. Tasted like it too. Or pancakes. I tried a crust that was like a pancake one time.

I’m not sure why I had such terrible luck, but it made me feel better to know that I’d never had good gluten-free crust at a restaurant either.

by Annalise Roberts. If you don’t have that book, I highly recommend it. Very highly. Some of her recipes were so good that I decided to give her pizza crust a try.
You can not imagine how excited I was when the pizza crust was not just passable, but good! 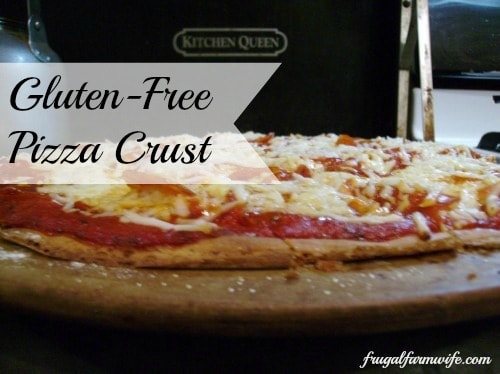 BTW, did you notice how I took these pictures on top on my mom’s totally awesome wood cook-stove?

Did you? That thing heats an entire two story house. It’s awesome. When I grow up, I’m getting one.

Anyhoo, Back to the pizza recipe. I’ve made this three times in a row with excellent results. Crispy on the bottom, slightly chewy on top. Without a doubt, it’s the best gluten-free pizza crust I’ve ever had.

*You can sub 1/2 cup of millet flour for some added flavor.

mix all of these ingredients together and add:

Mix together until dry ingredients are incorporated, then beat for two minutes. Spread onto generously oiled pan which has been sprinkled with cornmeal (the corneal is optional). One recipe almost covers an 11×15 jelly roll pan for me.  Let rise for 30-40 minutes. Preheat oven to 425 and bake crust for 10-15 minutes. Remove from oven and top as desired. Place back in oven and bake for another 10-ish minutes. Or you can take it out of the oven after the first baking and use later. I haven’t tried it yet, but it’s also supposed to freeze well.  (Upate: it freezes very well).

This recipe was slightly adapted from Gluten-Free Baking Classics

which I highly, highly recommend. Oh, did I already say that? Anyway…

If you liked this recipe, you may also like: