You are here: Home / Family / On Renovation and Marriage

If there’s one thing this house renovation has taught me, it’s that after eight years, Gabe and I are still getting to know each other.

I know that sounds ominous, but it’s really not – not in the way that one contractor made it sound when he rattled off the percentage of couples who end in divorce when they try to build a house together. it just is. 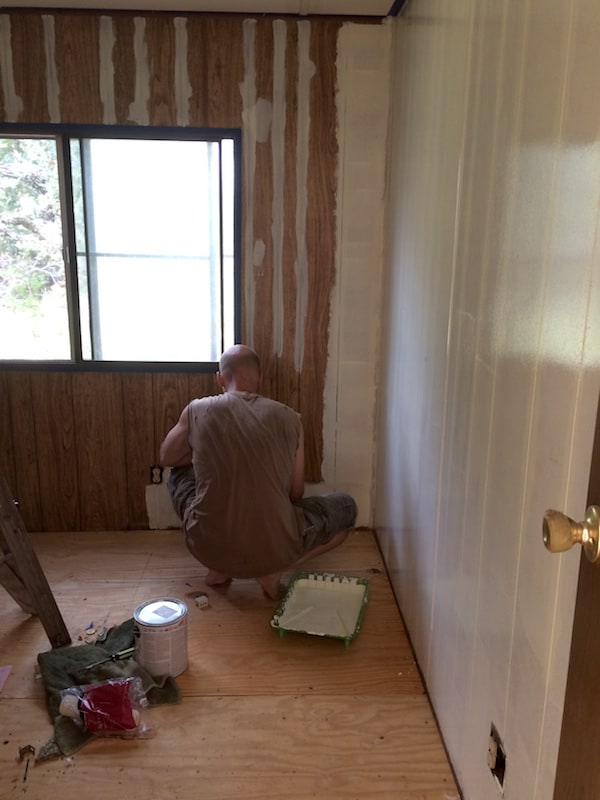 Part of the reason is that I’m a slow learner. I’ve learned that I make assumptions about people based on the way I was raised, and what I’m used to.

However, Gabe wasn’t raised anywhere near me, or anything like I was, so needless to say, those assumptions haven’t served me well.

Especially that one about leadership and the role of husbands versus wives.

How many times over the years have I held back, afraid of being one of “those” women – the ones who step out in front and don’t let their husbands lead.

And how much angst has that caused in our family?

Probably the most painful example happened last year when we were in Argentina. We stepped off the bus into the country’s second largest city, and Gabe turned to me and said “so where are we going?”

Hadn’t he researched? Hadn’t he thought about this AT ALL? 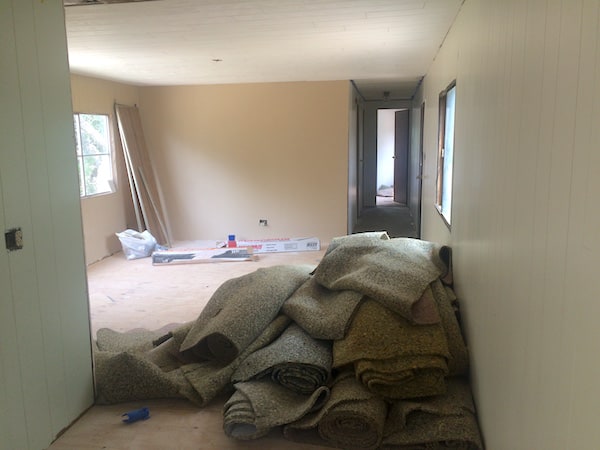 A pile of carpeting materials – can’t wait to see the house after the floors are all in!

We ended up in a cafe using turtle slow internet to politely argue about who was going to decipher argentine hotel websites.

I was angry and frustrated with what I perceived to be my non-leader husband.

That sounds like a trivial issue, but it was the culmination of two weeks on the road, plus events leading up to our trip.

I’m sorry to say, I felt sorry for myself for a long time for having to carefully tread the line between letting Gabe lead and, well, leading.

In fact, when we first got our mobile home, I tried really hard to be hands-off in the planning, thinking that Gabe, being a guy, would know what to do, and not appreciate me trying to insert myself into the middle of it and start making decisions.

But if you’re familiar with Strengths Finder’s you already know where this is going.

Planning is not Gabriel’s strength. It’s mine.

I was inserting my pre-conceived notions that women who step up are overbearing (thanks, amish upbringing), and men who don’t are limp-wristed. 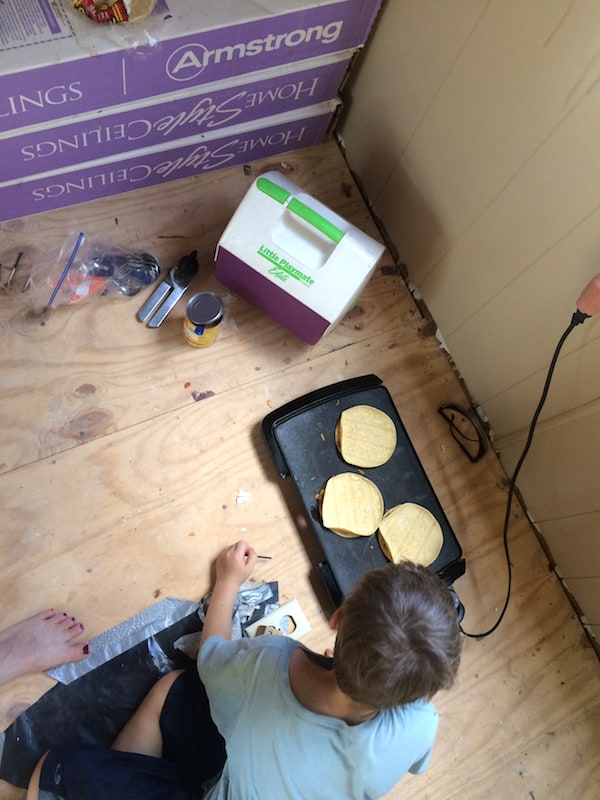 Garrett, making quesadillas for lunch while Gabe and I worked on ceiling.

But now, it won’t be long until the house is done enough to start moving into, and it’s because I’m slowly coming to the realization that being a good wife, or a good husband isn’t based on someone else’s notion of how a marriage is supposed to work. It’s all about us working together using our unique strengths.

So here I am, making plans, discussing them with Gabe, and moving forward with them.

In the end, I don’t think it’s about who did the research on which ceiling option to use, or who picks the hotel in Argentina. It’s about working together, and respecting each other’s strengths and weaknesses.

The ceiling is actually a long story btw. We did a little research, and found that drywall was by far the cheapest way to go, so we bought drywall, and got exactly two pieces hung before Gabe, who had never touched drywall before in his life said nope, this is too far outside my wheelhouse (let’s just say that mobile home ceilings are less than ideal, and made hanging drywall complicated).

So we decided to hire a contractor.

So easy, right? That’s what we thought. But getting a contractor for such a small job during a busy season turned out to be a bit harder than that.

We did manage to get one quote for doing the whole house – for five thousand dollars plus supplies. Ouch!

After that, we wasted a good three weeks trying to find another contractor for just the ceiling before I finally realized that yes, drywall was the cheapest idea – but only if we were doing it ourselves!

So I did some more research – and by research I mean I visited lowes.com – and found an affordable ceiling plank that I liked.

Boom! Progress resumed. Yes, it’s more expensive than drywall – to the tune of $600 just for the living room and kitchen – but we’re able to do it, and do it quickly. 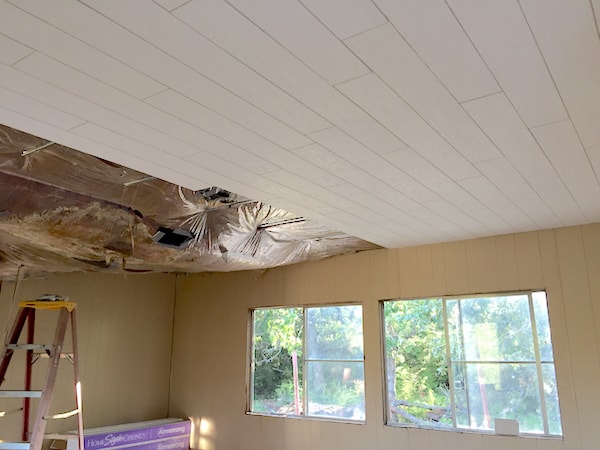 We hope to replace a lot more of the ceiling than just living room and kitchen eventually, but that will be after we have more imperative things like the septic tank done – when you’re working with an all cash budget, you learn to prioritize. 😉

The beauty of this Armstrong Easy Up planking is that we can lay it over the existing ceiling, which means we can add it after we’ve moved in without making too much of a mess.

Our house is going to be such a hodgepodge of “whatever works for now”. Ha!

One of the things I wish I’d done earlier though, since we spent so much time this summer spinning our wheels, is hung and finished drywall on the walls a little bit at a time. You know, bite-sized, doable pieces.

We did end up using some of the drywall we bought for the ceiling on three short walls throughout the house where the paneling was too damaged to undesirable to paint over.

It seemed like such an overwhelming, time consuming job to do the whole house ourselves, that we hadn’t planned on doing any of it, but having those three walls under my belt, I realized that we should have just done one wall at a time, and reevaluated each time.

Then we’d have all these nice, smooth walls.

But it’s okay, because we’ve learned so much, and really, the paneling doesn’t look half bad now that it’s painted.

This week, we got the electricity all hooked up,  and we have a contractor/friend from church installing floors.

After that, we’ll finish hanging the kitchen ceiling, and then.. it’ll be time for cabinets!

I’m equally looking forward to, and dreading getting cabinets.

I have this “dream kitchen” in my head, but putting super nice cabinets and countertops in a mobile home seems a little silly.

Here’s hoping we can strike a nice balance between loving the way it looks, functionality, and cost.