You are here: Home / Family / Cloth Diapering; A lightbulb Moment

A friend and I were talking about cloth diapering at church a few days ago. She was pretty excited about the Fuzzibunz she’d just purchased from ebay. I use mainly Smari Pants,  which are much the same. Both are pocket diapers, both snap down to multiple sizes, both are incredible at wicking moisture away from the baby’s skin, and both use micro-fiber inserts.

The problem with these diapers is that they start leaking fairly quickly, and sad to say, I just assumed that was the  nature of cloth diapers.

Well, I don’t know about your kids, but mine fills his diaper really full during the night. I have no interest in getting up at night to change diapers, so I’ve always just used paper diapers at night…. and dealt with wet sheets in the morning any time Garrett decides to sleep on his belly. He’s been sleeping on his belly a lot lately.

Anyway, this friend was telling me that for her little boy, she folds the insert in half and puts it in the front part of the diaper pocket for daytime use. Like so… 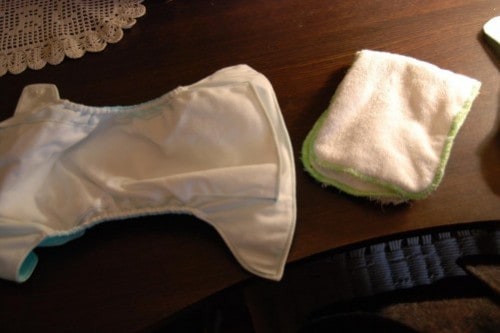 At night, she adds yet another layer. Like this… 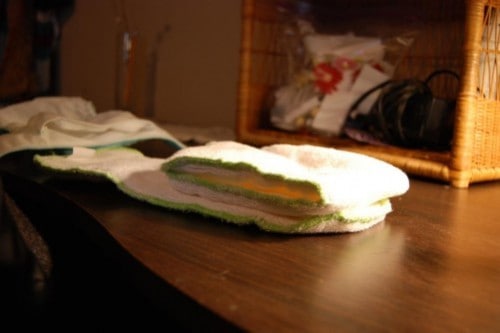 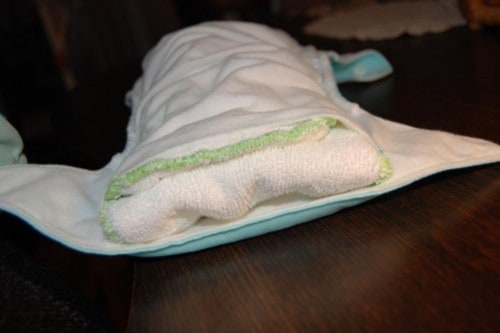 Talk about a light bulb moment! Why hadn’t I thought of that?! I love having friends who are smarter than me.

The next morning, I pulled the insert out of a diaper and folded it. I gotta tell ya, it’s thick. But it lasts a lot longer. A whole lot longer. That night, I tried the doubled up diaper. Garrett wore that diaper all night, and slept on his tummy a lot. But guess what? All his clothes were dry the next morning! I did change it as soon as he woke up, and it was heavy, but his clothes were dry!

I have to admit that part of my motivation to go to cloth exclusively is so that I can quit spending my swagbucks gift cards on diapers. There’s so many other things I want to spend them on… like books…. but I digress.

I stated in an earlier post that, in my opinion, two dozen diapers were the bare minimum number to have for diapering one baby. I’m finding that two dozen really are the bare minimum. Eventually, when I can find the ones I want for the right price, I’d like to get another dozen diapers and maybe two dozen more inserts. It would be nice to have more than just one insert per diaper since we use two at night.