You are here: Home / Family / Weekend Wrap-Up – That Time My Brother Became The First Graduate In The Family

Ah, another two weeks gone by. I usually try to do a wrap-up every week, but last week we were in Tennessee celebrating my younger brother’s graduation from high school.

I'm so stinking proud of this kid! The last three years have not been easy to say the least, but he powered through to graduate high school with honors. And now I feel old. I mean, is my little brother seriously out of high school already?!

This is gonna sound crazy to some of you, but he’s the first one of us eight siblings to ever go through high school. But don’t worry, it wasn’t because we were all bums (well, not entirely anyway ;)), it’s because we grew up in an Amish community, where eight grade was the standard. And then we moved away from our Amish lifestyle, and for some reason, the standard in our family never got raised – at least not until Levi came along with his ambitions of college. 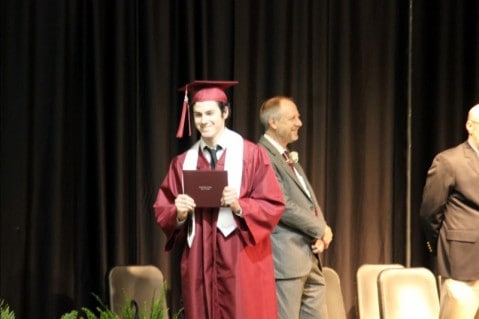 He’s changed his mind several times – as teenager tend to do – about what he wants to study in college, but college bound he is, and I’m so proud of him! I actually got teary eyed when he walked across the stage to receive his diploma. Weird. Maybe I’m a bit of a stand-in for mom since she’s not here to be the emotional one when her babies do something big.

This whole lack of formal education in our family has caused me to do a lot of self reflection over the last several years – not just because my brother graduated last weekend. I do definitely regret not going through high school, or at least getting a GED, and I would have liked to further my education into college, but at a young adult living in a conservative home, I was not allowed to do those things. 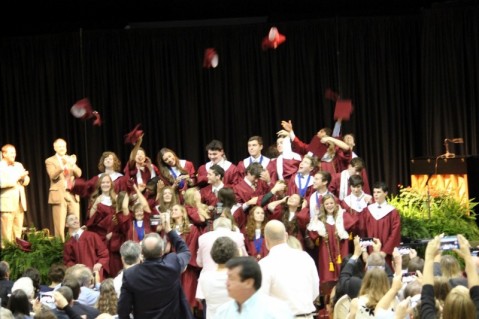 I still plan to get a general education diploma… one of these days. But the reality is, I’ve just got too much on my plate as it is, and since I do have marketable skills (social media marketing being the primary one I do from home), it always ends up on the back burner.

All of that said, I don’t regret the path I’ve taken through life. I know that formal education could have made my life easier, but I also know that the struggles and challenges I’ve faced have made me who I am today, and I’m pretty happy with that. 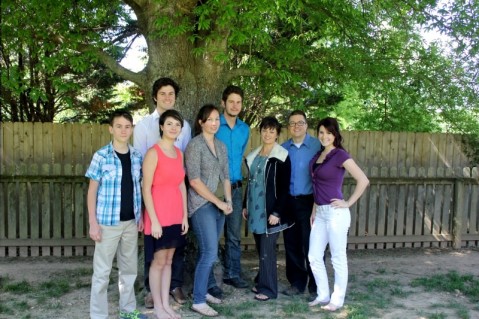 ^^That’s all eight of us BTW

AND I will say this, I plan to take a very different approach to education than my parents took. I want to encourage my kids to not only go through high school, but college as well, if for no other reason than the confidence they’ll gain from having accomplished something hard.

A lot of people say that many college degrees are wasted – graduates often end up working in a completely different field, and I’ll just say this; no building up and developing of the mind is ever wasted.

And that’s my two cents for the week. 😉

Favorite Tip Of The Week

If you’re traveling with small kids, leave as early as you can in the morning, carry your kids straight from the bed to the car and tuck them in good with a cozy blanket so they’ll sleep as long as possible for the trip. This has worked so well for me in the past that I finally had to stop and wake up the kids because I had to get out. Next time, I’ll drink less tea I guess. 😛

If you wait until they’re awake to leave, you end up with the kind of thing you see in the picture above. 😛

Book that I can’t put down.

Rhinestone Jesus. You’ve probably already hear about it, or even read it, because I am WAY late to this party, but the kindle version was on sale recently, so I snatched it up. Gabriel was a little incredulous that I would read something with such a title, and I admit, it sounds like a really, really bad Christian novel, but It’s NOT.

Man, I just cannot get over this book! You know how you read about things people do, how they build a business, or a ministry, or do something big, and you know, they just seem kind of larger than life, and unrelateable. Like, that’s nice, but it has nothing to do with me.

But in Rhinestone Jesus, Kristen, the author, tell their story in a very real, human way. Their family is a lot like everybody else’s family. They go through the same things we go through, and they live comfortable lives just like we do. But God called them to do something big, and he made it happen, and it’s amazing. SO incredible!

I started reading it on the drive up to Tennessee, and was just amazed. One couple, with three young children heard the call from God to DO something, and dozens of lives have been changed as a result.

Recipes and meals we enjoyed

I think they’re even paleo. Whatever they were, they were GOOD. I made my own coconut butter in our fancy new Ninja blender, while it got runny, it never truly go smooth – there was still a bit of grittiness in it. Oh well, you couldn’t really taste it once you mixed it with peppermint oil and maple syrup.

Then of course, topped it with chocolate.

I’m hoping to make more, and use stevia to sweeten them, as well as to make the chocolate, so it can be less glycemic, and even healthier. Maybe not quite as delicious, but still delicious. We’ll see. In the meantime, I’m toying with publishing this recipe here on the blog. We’ll see.

Yep, it has sugar in it – evaporated cane juice to be exact – but no high fructose corn syrup, so it’s still a win.

Growing up, we use to eat popcorn and read books together as a family, and now that tradition is being passed down to my own kids. Because family time is important! #glutenfree #nongmo #nocornsyrup #homemade #recipe #snack #carbs #badmom #HaveAJOLLYTIME #ad

I try not to make it too often, but when I do, boy is it good. At least, I think it is. The kids eat it so fast I barely get any. 😉 You can see the recipe here.

So this was interesting, It didn’t really taste like Mac ’n cheese to me, but the kids didn’t question it. Well, they questioned putting spinach on it to make it look pretty, but they ate the actual dish.

I got the recipe from Fork and Beans, and mostly followed it to a T, and then I ruined it’s vegan-ness and put a can of tuna in it. Oops. But tuna always make Mac ’n cheese taste better, so you should try it!

Y’all, I really need to write things down when they happen, because I forget what they say, but man, these kids say the funniest things!

Garrett to his group of cousins: “I’m going to turn five in a couple weeks, and then I’m going to get married.”