You are here: Home / Save Money / How A Family of Four Started A Savings Account on Minimum Wage

A few years ago, Gabriel and I were living in Tennessee, raising cows, and starting a family. They were good times, living right next to my family, getting to see my mom and most of my siblings every day, but that didn’t keep those days from being just as much of a disaster as a blessing. 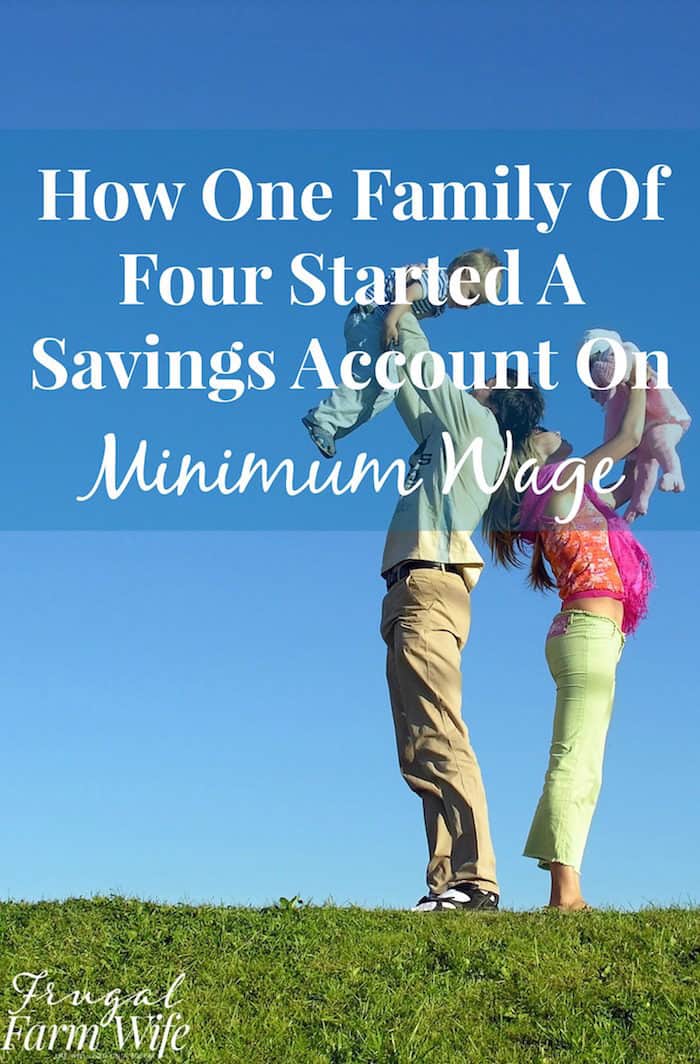 Without going into the nitty gritty details, our cattle operation failed, and we went broke – not just broke, but in debt, though I didn’t find that out until later.

To pay off the debt, we sold the cows, and the rest of our animals, then moved back to Texas, where Gabe found a job, and where his family lives.

Shortly after that move though, his health took a major downhill turn, and he had to quit his job.

In the short term, quitting that job was a huge blow, and stalled our ability to pay off the debt, but the blessing was that it enabled him to build a custom holster making business from home with what energy he did have.

At the same time, I started making a lot more money online now that I was no longer tied up with farm chores, and the slow internet that came with living way out in the boon docks.

That’s not a huge savings, but for a person who made $15k in a year, it’s pretty darn good!

Here’s what we did, and why we did it.

Why We Were Willing To Make Sacrifices

I think the most important factor in living below your means and saving money is knowing why you do it. If you don’t have a clear reason, what’s the point? It just feels like deprivation.

I may have been a broke stay-at-home mom, but I’m a broke mom with a lot of big dreams. Two of my big dreams are to travel and to own real estate.

Both of those things take money, so for me, saving money was more of a priority than having nice things.

Yes, I want a new couch, and a refrigerator with an automatic ice maker that works, but those are #firstworldproblems, and I’m happy to wait to have them until later when I’ve accomplished some goals. (At least, that’s how I feel most of the time. 😉 )

How We Saved Money

Now we’re getting into the nitty gritty. The uncomfortable details that  so many people have heard me talk about and say “nope, that’s not for me.”

That’s okay for you. Like I said, I have goals. You probably do too, and they might be different than mine. That’s okay!

So here you go:

We lived on last month’s income

That’s a place that’s hard to get to when you’re broke. You have to commit to not buying anything, or spending money on anything – sometimes not even driving your car. But it’s worth it once you do!

Because we lived on income from last month, it took a lot of stress out of our finances. All the money that we needed for a month was already in the bank. I didn’t have to worry about working enough hours, having enough clients, or whether those clients would pay on time for us to make our bills. It was, and is, a huge blessing!

Dry beans, potatoes, frozen broccoli, and eggs were staples in our diet. I literally bought four 25lb bags of beans, which I could do because I had the money for the entire food budget for that month up front. (We still have beans left from those bags btw.)

We shopped at cheap stores

I don’t think I even set foot inside a Kroger, and if I went to Whole Foods, it was a rare treat, and usually because I was with someone who wanted to go – not because I could afford to buy anything there!

Our groceries came primarily from Aldi, Save-A-Lot, and sometimes, Walmart. For non-perishables, I would scour the internet – mostly Amazon – looking for deals, and buying in bulk where I could to save on price per unit. It was sometimes a lot of money up front, but they were things I knew we’d use, and like I said, we had the grocery budget up front, so it was doable.

Our clothes came, and mostly still come from Goodwill. The end, amen.

This has been a huge blessing! And even though I budgeted every month for rent in case Gabe couldn’t get the work in that he needed to, I ended up being able add that money back into our savings account at the end of each month.

To be sure, it’s not an ideal house by a long shot, and we plan to move out sooner rather than later… but it keeps being easier to stay. Why is moving so hard?!

We drove (and still drive) a cheap, old car

Gabe and I have very different definitions of what a reasonably new car is, and it took us a while to agree on this, but…. we finally bought a two thousand dollar car. It was older than I wanted, but definitely so well taken care of that I couldn’t argue with it at that price. This car is proof you can buy a used car without losing your shirt.

Sure, it’s just a Ford Focus, but it’s dependable, and gets us where we want to go. Isn’t that the whole point of a car?

We had cheap phones

Having a “dumb phone” has always been less than ideal, but we worked around it. In fact, I only recently got my first smart phone, and only because my old phone was falling apart and because I found Ting.com, which allows me to pay as I go, and ends up costing less than $20 month. Now that’s an affordable smart phone!

(also, my old phone survived me swimming with it, and slamming in a car trunk, so I felt like it deserved to live until it died a natural death, ya know? ;))

I’ll be honest, it is not always easy to say no. Church functions, parties, get-togethers, going to movies, out to eat, attending fun events in town – all stuff we wanted to do, but honestly, almost everything is a minimum of 30 miles away, and that adds up quickly in gas money if nothing else. So as often as not, we said no.

The times we did go out, we did our best to “batch” our trips. For instance, if we need to go shopping, we’d try to wait until a church get-together day, and do our shopping on the way home.

Or, if Gabriel needed to drive 60 miles away to Waco, to pick up saw blades for his special saw, I’d go for him, and make that trip count by going to Aldi, Goodwill, and various other stores that we don’t have nearby. I literally have a running list of things we need to stock up on, or clothes the kids or I need so that when his last blade breaks, I’m ready to go.

We kept the car parked whenever possible

You’d think I covered that in the last section, but no, that’s not what I mean. What I mean is that we don’t drive the car when we’re going somewhere close enough to walk or bike to. Think making quick trips to the nearby store, paying bills in town, the post office, Gym, city park, you get the idea.

What do you mean it's not meant for hauling children? #oops don't freak, it was just a short ride.

Sometimes, it feels a little weird, like people think you’re weird for walking or biking when they know you have a car. But I got over that pretty quickly. Partly because I think it’s ridiculous to drive just because you can, and partly because I want as much exercise as I can get!

I do try to remember to wear athletic clothes though, so people just assume I’m exercising and not running errands when they see me. 😛

We didn’t pay for entertainment

And I don’t mean movie theaters and concerts. I mean TV and Netflix. Of course we have both Netflix and Hulu now, but we don’t view those things as basic necessities, and if we ever run into financially hard times again, they will be the first things to go.

We didn’t pay for gym memberships

This one was easy for us, because first off, we have some weights of our own, and secondly, there’s only one gym in this town – the high school gym, and it’s FREE for town residents to use. The only drawback is that we have to go before or after school (on weekdays at least).

And that’s pretty much it!

The bottom line is, we just did without a lot, and aggressively looked for ways to save money on the things we did need and want. Doing without some things in the short term was (and is) well worth the safety net we have now.

The happy ending to the story is that Gabriel’s business has grown, and so has mine. Oh, we’re not rich, and we still spend smart.

That’s why we were just able to pay cash plane tickets for the whole family to go on a three week vacation in South America. Not something we would have been able to do while we were raising cows (for a number of reasons!).

Which makes that ranching failure a blessing in my book, and I hope you can take inspiration from our story.