You are here: Home / Farm Life / We Finally Moved Into Our 40 Year-Old Mobile Home

It was a bit of a crazy whim.

Gabe and I had talked – briefly – about buying a mobile home to put out on the farm so we could stop paying rent, stop driving from town to farm every day, and finally, after seven years, have a place that would really be our own.

Then somebody posted in the local Facebook classifieds group about this, and we bit.

It was advertised as livable, and it was – depending on how you define livable.

For the record, the kitchen cabinets looked like this the day we bought it: 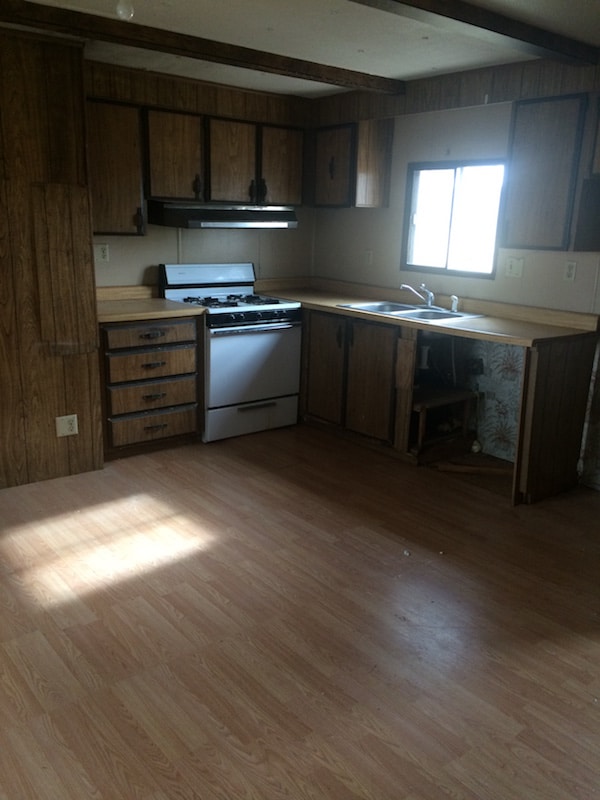 So we knew when we moved it to the farm that this house would be a remodel job, and planned on taking about five months to do it (even though we had no clue what we were doing!)

Honestly, there were a lot of times when I looked around in frustration as we were tearing out the ceilings and floors, thinking about how much better off we’d have been if we’d just spent (several thousand) dollars more, and got a ready-to-move-into mobile home.

Because remodeling ain’t cheap, and neither is paying rent five months more than you planned on.

But the big upside to doing our own remodel, is that now we have the home we want.

We all know how mobile homes are.

But now we have beautiful cabinets. 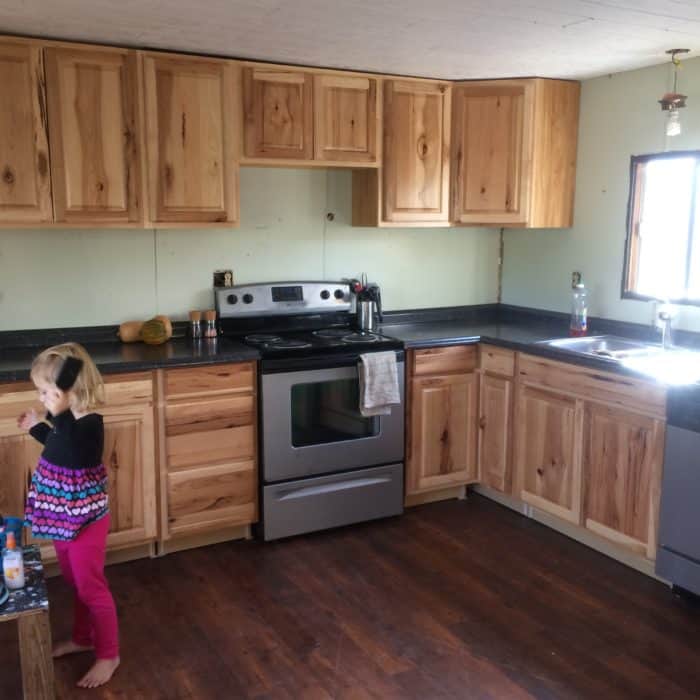 So it was worth it.

But it’s still not done.

Not by a long shot!

We moved in the week of Thanksgiving, and to be honest, things are still a bit of a mess.

Case in point: our closet, which we moved to the master bathroom when we took out the garden tub, still isn’t even framed, even though it’s holding our clothes.

And for that matter, the toilet and sink aren’t in that bathroom either, so we’re relying on the main bathroom for everything but showers.

And of course, we haven’t even started on the baseboards and trim, so the whole house looks a little rough to be honest about it.

But right now, I’m leaning pretty heavily on the kitchen, because I. Love. It. 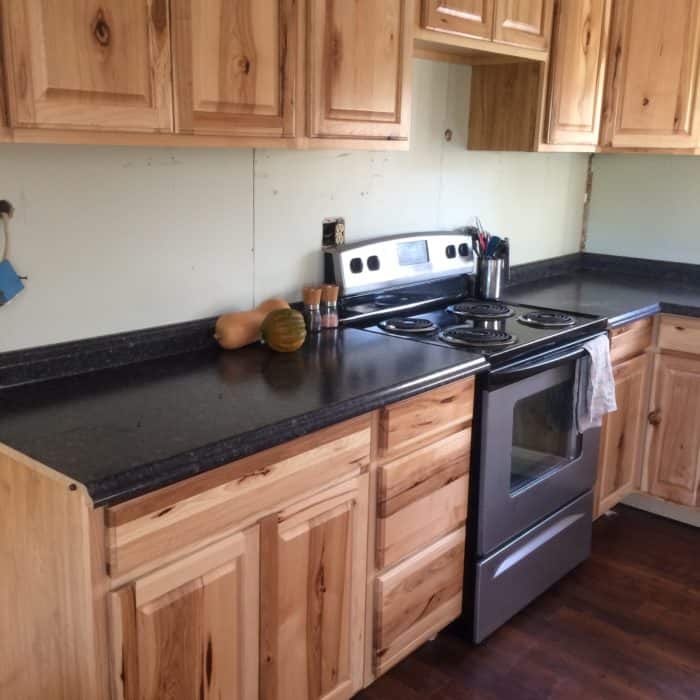 It’s easily the nicest kitchen I’ve ever had, with its pretty cabinets, and the countertops Gabriel picked out.

It’s small, yes, but I’m okay with that, because it makes everything easier to reach. I honestly didn’t realize how important an efficiently designed kitchen was until our last house, which featured a stand-alone stove several feet away from the cabinets and sink, and cabinets with no drawers!

We still have along way to go in terms of cosmetics, but it’s home, and that makes me pretty darn happy.

A lot of you have asked me how much we’ve spend on this little house, so for those of you still reading (bless you!), here’s a partial rundown:

Expenses we haven’t been billed for yet:

We had originally wanted to go with composting toilets (so crunchy, I know), but It turned into a big hairy deal with us digging trenches to fit the tanks under the house, and then digging more to give the tanks ventilation, that we sent the $2,000 tank back (fortunately, we hadn’t bought the actual toilets or the second tank yet!), and decided to go with a septic after all.

Yes folks, to get two Sun-mar Centrex 2,000 series one-pint flush composting toilets would have cost as much as hiring someone to install a septic tank. (and there you have a big reason why most people don’t “go green” – it’s just not economical for the average Joe! But that’s another rant for another day).

There are cheaper toilets, but they involve 1.) dual chambers (one for #1, and one for #2), which make them complicated for guests and children to use, 2.) carrying out your waste, which I felt like might become a contention between us, because I already know I don’t want to do it, and I knew I’d get annoyed if I had to ask Gabe to do it, and 3.) having your waste sitting inside the house is just begging for an accident to happen – not to mention gross.

As I mentioned above, we could have bought a pretty nice, used mobile home for that price, and been moved in months ago, in fact, the main reason we didn’t is because Gabe couldn’t wrap his head around spending that much.

So instead, we now have a home that we were able to make truly our own, so it’s a pretty good trade off.