You are here: Home / Farm Life / Animals / Dairy Goats: Can They Save You Money?

Butterscotch, Shortly after her first kidding

As many of you already know, we recently became dairy goat owners again. So I suppose it’s no surprise that goats are so much on my mind lately.

Something about goats that continually astonishes me is how low maintenance they are. Oh, they want you to think they’re high maintenance alright, whining if they even think its going to rain and all that, but their actual requirements are surprising low.

Mostly, I’m referring to how much they eat. Vanilla currently consumes one quart of alfalfa pellets per feeding/milking, which is a twice daily occurrence. Other than that, she subsists solely on roughage she grazes in the back yard on her picket line. Well, that and water.

I’m convinced that with a little management, a single dairy goat could be kept in the average back yard.

So what would it take to get in the family dairy business? 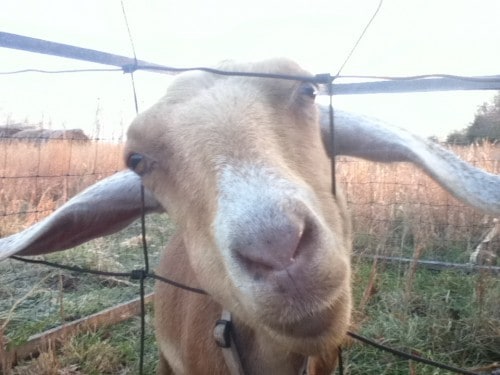 Our current milker, Vanilla. I tried to get a picture of her yesterday on her picket
line, but neither she, nor my photobombing toddler would cooperate.

Now for a cost breakdown.

Let’s say you’ve never milked before and your lack of skill causes your goat to lose production so she only gives 1/2 a gallon per day. That’s 3 1/2 gallons every week or roughly 14 gallons per month.

I think it’s safe to say that quality milk for $3 a gallon would be a really good deal, that would come out to $42 for those 14 gallons, but with you own goat, you only spent $15 on feed. Hopefully, but we should create some wiggle room and say you budget $25/ month for goat upkeep. Still a great deal.

Of course that figure doesn’t take the initial cost of the goat and all her …stuff… into consideration.

You could go all out and buy a registered doe for roughly $300. The benefit to this would be the ability to sell register able kids for a lot more than cross bred kids. You also have a much better guarantee that she’ll be a good milker.

On the other hand, you could get an unregistered doe for perhaps $100. The quality of her udder and teats may or may not be as good. We once bought a Nubian/Sanaan cross bred doe for $100. She ended up being slightly harder to milk than our registered Nubians. When she kidded, she had two doelings which we sold for $75 each at 3 months old. Not a bad deal, eh?

Our wonderful cross-bred doe, affectionately named Tri-Pod because yes, she has three legs.

Okay, let’s assume you go with the registered goat. If she’s fairly young, she should last you for several years, but let’s average the cost out over two years just to be on the safe side.

Your first year expenses would be:

If that’s more milk than your family will use (as milk), and it’s certainly more than we use, keep in mind that you can make your own delicious yogurt and cheese which cost even more than milk does.

Since you went with the registered doe, it seems reasonable to assume that you could expect to average $200 a year selling her kids at 3 months old. We’ve sold 3 month old doelings for as much as $250 each, the bucks however often sell for as little as $50 each.

We always hope of course for twin doelings, but seldom ever get it. One of each seems to be the most common, but occasionally, we get twin bucks. That’s always a bummer.