Looking for something tasty to go with your gluten-free biscuits? This spiced crock pot pear butter recipe perfectly pears the sweetness of pears with the warmth of fall spices for the perfect spread. 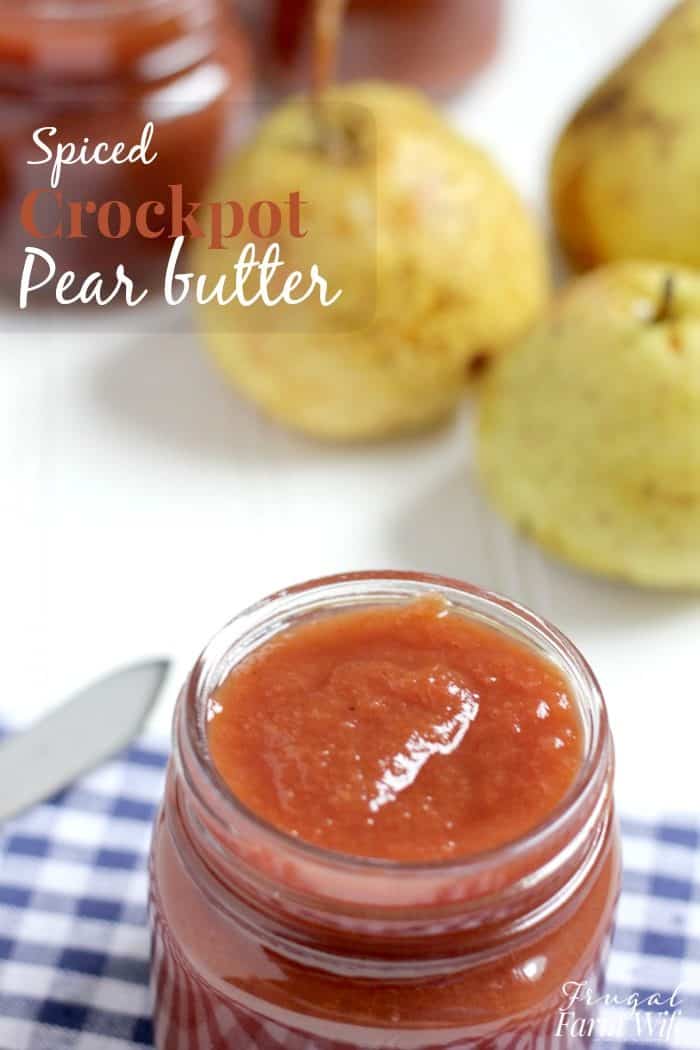 I grew up reading and idealizing books about the pioneers. Not the ones where they crossed the Oregon trail, obviously. More like Laura Ingalls Wilder’s Little House series.

I loved the idea of distinct season, and how they made the phases of farming so clear cut.

But I never understood why they were that way.

How in the world did they get their pumpkins to wait until September or October to be ready for harvest? If we planted ours that late, they’d be eaten up by bugs.

And for that matter, how did they get all that produce to stay fresh in their cellar all year? Our best bet for keeping cabbages through the winter was covering them with green house plastic in the field, and getting apple trees to produce at all was hit and miss.

This may not be a great admission for the state of my intelligence, but I was an adult before I figured out it was because they lived in Wisconsin, and we lived in Tennessee.

And now we live in Texas, where we’re currently harvesting pumpkins and pears at the same time, and we won’t even try to store them over the winter in their natural state. 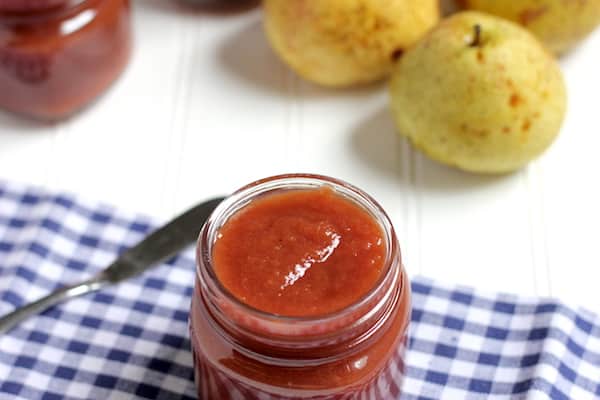 Instead, we’re roasting the pumpkins, and freezing pumpkin purée, and canning pumpkin butter – at least with the pumpkins that don’t turn into yummy pumpkin desserts first.

And while our food may not keep in the cellar all winter, we are able to grow food during a much longer season, which makes up for a lot of it.

While I was making this pear butter, I couldn’t help remembering what a rare treat this kind of thing was for the Ingalls family.

The way she raved over the luxury of half a canned peach was in stark contrast the way overabundance of food diversity we have at our fingertips here in the U.S.

I think we sometimes don’t appreciate the delicious food we have access to 24/7 the way we should.

And I know I don’t appreciate the conveniences I have in my kitchen that make it so easy to prepare.

Case in point: Gabe and I sat at the table to peel and core these pears together for about 15 minutes (while hashing out some plans for next week).

Then, I simply dumped them in the crock pot with a few spices and a scoop of sugar, turned it on and walked away.

Of course, I came back after supper, when they were cooked through, with yet another handy gadget – an immersion blender – to purée the quartered pears into sauce. 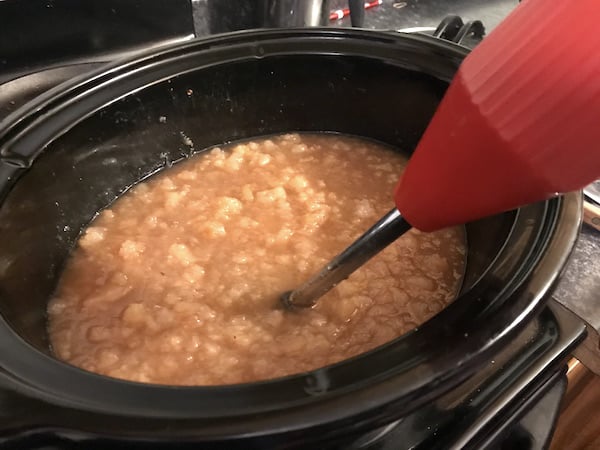 Then I walked away again, to let the spiced pear butter cook down overnight in the crockpot.

When I woke up this morning, my house smelled amazing, and more importantly, my pear butter was ready to can.

It’s really pretty amazing when you think about it. 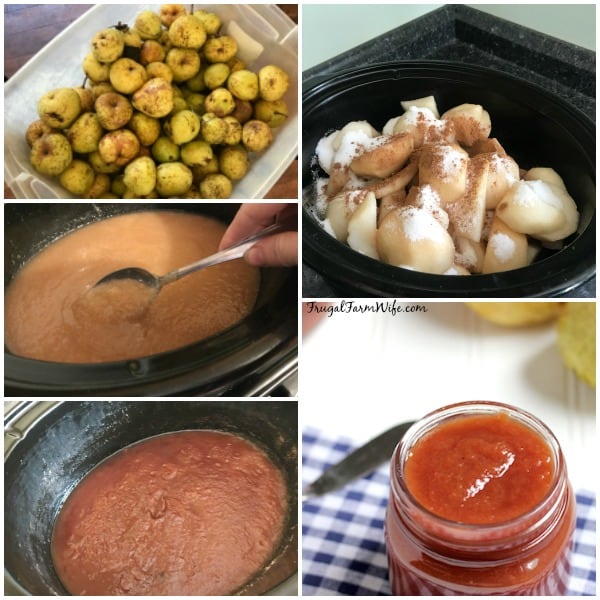 Next week, when the rest of the pears are (hopefully) ripe, I’m looking forward to making spiced pear sauce to put on our pantry shelves next to this pear butter, and in the meantime, I’ll be roasting pumpkins, working out my favorite version of a pumpkin butter recipe (for the luxury of variety), and getting the rest of my fall garden planted.

There’s always something to do, and it usually involves food around here, which is part of the blessing of living on a small farm.

Thanks to that business, plus the part where I’m also homeschooling my kids, I stick mostly to super simple recipes, and you’ll find this one for crockpot pear butter to be one of the simplest.

After you’ve made (and tasted!), do me a favor and rate the recipe plus leave a comment underneath this post. Pretty please?