Is there really a peaceful night-weaning solution? I believe so. 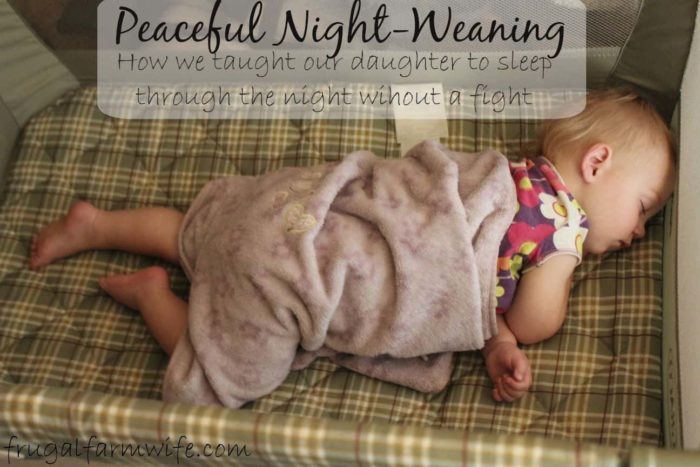 We’re moving, and during this painfully slow process, we moved our bed. Unfortunately, we haven’t had the opportunity to sleep on that nice, large, queen-sized bed for a couple of months now, leaving us in a smaller, less comfortable substitute.

In short, co-sleeping, our favorite method for how to get enough sleep with a newborn, quit working. Neither Gabriel, nor I were sleeping well. In fact, Gabriel was ending up on the couch before morning more often than not.

Still, while we knew that we had to do something about this predicament, neither of us were keen on letting poor Haddassah cry her eyes out several nights in a row while we ignored her. There has to be a peaceful way to night-wean, right?

To tell the truth, I’m not a big fan of the cry-it-out method under almost any circumstances.

Do kids cry? Yes, inevitably. Should you ignore their pleas for comfort until they finally give up? Well, let me put it this way; Every time Haddassah has ever cried for an extended period of time, there’s been a good reason, and you better believe I’ll pick her up to check it out. I’m not talking about giving in to fit-throwing, which may start at several month old, but genuine pleas for help or comfort.

As an infant, that reason was often no more than a painful gas bubble that wouldn’t pass until she was picked up and wiggled around some. Now, it’s very rare for her to get seriously upset about being put in her crib for a nap, or bed time. I chalk that up to her security in knowing that her needs aren’t being ignored. 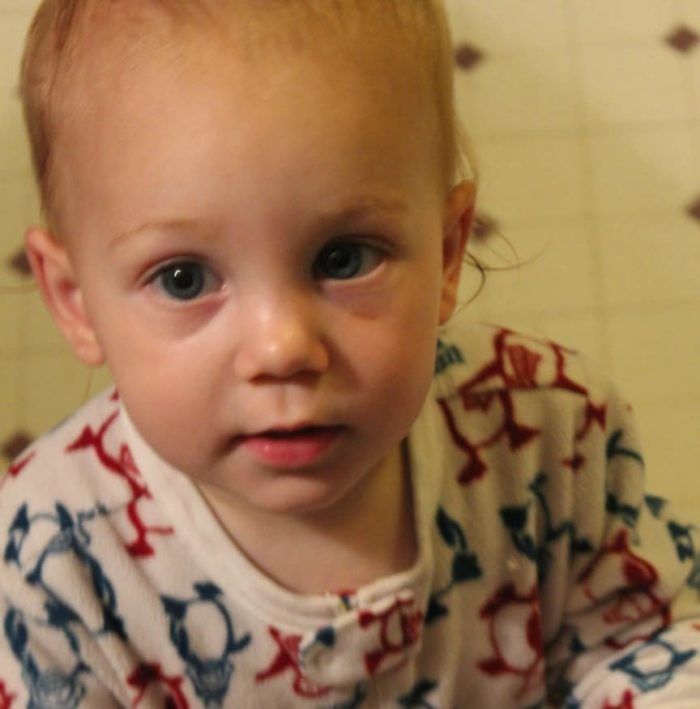 But I digress. The fact of the matter is that we needed to quit night-nursing. We quickly found out that despite my best intentions, night weaning was never going to work as long as the baby’s crib was right beside my bed.

I mean, what do you do when your baby wakes up in the middle of the night and you’re so sleepy it barely registers? Pull her into bed with you, of course!

So here’s what we did, no cry-it-out method involved: Put daddy in charge of night-time care.

And here’s why it works: Babies have no expectation of daddy nursing them. They see mommy, they want to nurse, they see daddy, they know it’s not going to happen, and they’re much more willing to go back to sleep without it.

So here’s exactly what we did, and why.

1st waking: daddy picks baby up and comfort her, tells her “night night” and puts her back in the bed. She grumps a bit, but goes to sleep

2nd waking: Daddy lays the standing baby back down and pats her back soothingly for a few minutes as she drifts back off.

3rd and 4th waking: Baby wakes and stands up, but lays down as soon as she sees daddy coming.

She woke up four times that first night! And yes, we got up four times, but do you understand how much more peaceful that is than letting her cry all night long?

The second, and third nights, Haddassah woke up twice. Since then, she’s slept a full eight hours every night. Since that has started happening, we’ve moved the crib back into our room.

When she wakes up in the morning, usually around 5:00 AM, I pull her into bed and nurse her. I figure that after eight hours, at the very least, she’s thirsty. She drifts back to sleep while nursing (usually), and I jump out of bed and start my day.

It’s very simple really, and a very common sense approach. Since the baby has spent her whole life being comforted upon waking, I believe it’s cruel to one day just leave her in the dark. Instead, we gave her that comfort, just in a slightly different manner.

Since she was no longer getting her nursing when she awoke however, she soon realized (on some level) that there was really no point in waking up at all.

It was that simple. It is that simple. Before you give up in desperation and sleep deprevation and try the cry-it-out method, I whole heartedly recommend that you try this peaceful night weaning common sense approach. I think you’ll be pleasantly rewarded.