You are here: Home / Save Money / Five Ways We Saved Money In August

Each month I like to go back through and document a few of the ways we’ve managed to save money recently, in the hopes that some of these things will inspire you to do the same! If you’d like to see previous month’s entries, check out the ways to save money here. 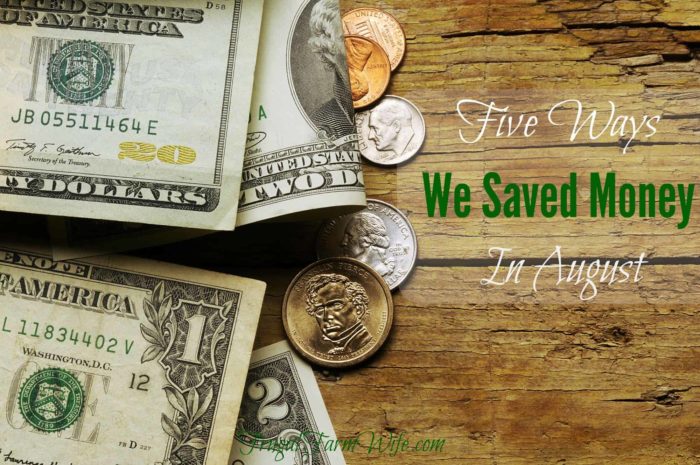 Every month I look back and it just seems like such a whirlwind, and I ask myself: did anything really happen? And honestly, most of the time, the answer is nope. Not really.

We ate breakfast, lunch, and dinner, we read way too many Dr. Suess books, we played at the park, and we for bike rides.

We did the whole “life with littles” thing.

I’m pretty sure I saw clouds parting and angels singing when it happened.

Well okay, fine. We still use a diaper every single night because night time accidents happen more often than not,

But we’re done with diapers! Haddassah has known the art of tinkling on the toilet ever since she was about a year-and-a-half, but I just never had the gumption to make a thing out of it until last month, and truthfully, it was because I was fed up with washing all those diapers!

Ironically, for a few weeks, I ended up doing twice as much laundry as I adjusted to the habit of taking Haddassah on frequent trips to the bathroom, but now, not only do I remember (most of the time) to remind her to go, but I can send her to do it by herself  sometimes she even goes on her own without me having to remind her!

SmartiPants. Far and away my favorite diaper AND (drum roll please) you can order seconds for seven bucks a pop, which is super cool because you have no idea what color your getting so it's like ordering a surprise. 😀 #clothdiapers #fluffybums #pocketdiaper

Potty Trained Our Toddler. So how does that save us money? Much less water and laundry soap being used, not to mention, the wear and tear on the washing machine is significantly less. Plus, washing the diapers fewer times with Haddassah leaves more life in the, for the next baby (which we’ll presumably have – no, I’m not pregnant!)

Washing Ziplock Baggies. I had to laugh when I was reading Sarah Titus’s new book, about the various ways she saves money. In one part, she figures that a single box of Ziplock bags will last her for a year because she washes and reuses them. Washing a single bag may not seem very worth while, but when you look at it like that it sure is!

Salvaging cheese and salad dressing out of single-serve salad kits that our grocery store was throwing away. Vacuum sealed cheese and dressing will last a long time, but the lettuce eventually goes bad, so the whole kit gets thrown away. I know it’s a weird thing to do, but I felt like I really scored going through those salads. Fresh parmesan cheese is expensive!

Cleaning out the freezer. We have a deep freezer out in the barn at the farm, and because it’s seven or eight miles away, I don’t see it very often – I just know (mostly) what’s in there, and ask Gabriel to bring home what I need when I need it. Imagine my surprise when I actually went out there a few days ago, dug around and found several whole chickens from the last batch we raised in Tennessee! I through there were two or three, but there are seven! Even though we certainly did pay for them and their feed back last year, I feel like I’ve just been given a bunch of free chickens!

Made do with what we have. Truth be told, we have a lot of stuff. Whether it’s food in the form of a 50 pound bag of cornstarch(!), baby clothes left over from both kids, or too much bubble wrap that we’ve saved up in case we need to ship something. We’ve been cleaning out the storage, organizing what needs to be organized, and actually getting rid of a lot of stuff, and it’s inspired me to simply make do with the things we already have, rather than thinking that I need something new. What I need, is to really think potential purchase over, and ask myself if there’s some way we can get around buying it.