You are here: Home / Live Well / Parenting / Why We Decided To Homeschool Through The Summer

I’ve gotten a lot of surprised, and even derogatory reactions from family and friends when they find out that we’re homeschooling throughout the summer this year.

I was a little surprised by this reaction, because it’s something my own mom did off and on throughout my childhood, but after talking to several of the other homeschoolers in our area, I guess it is a little bit of a weird thing to do. 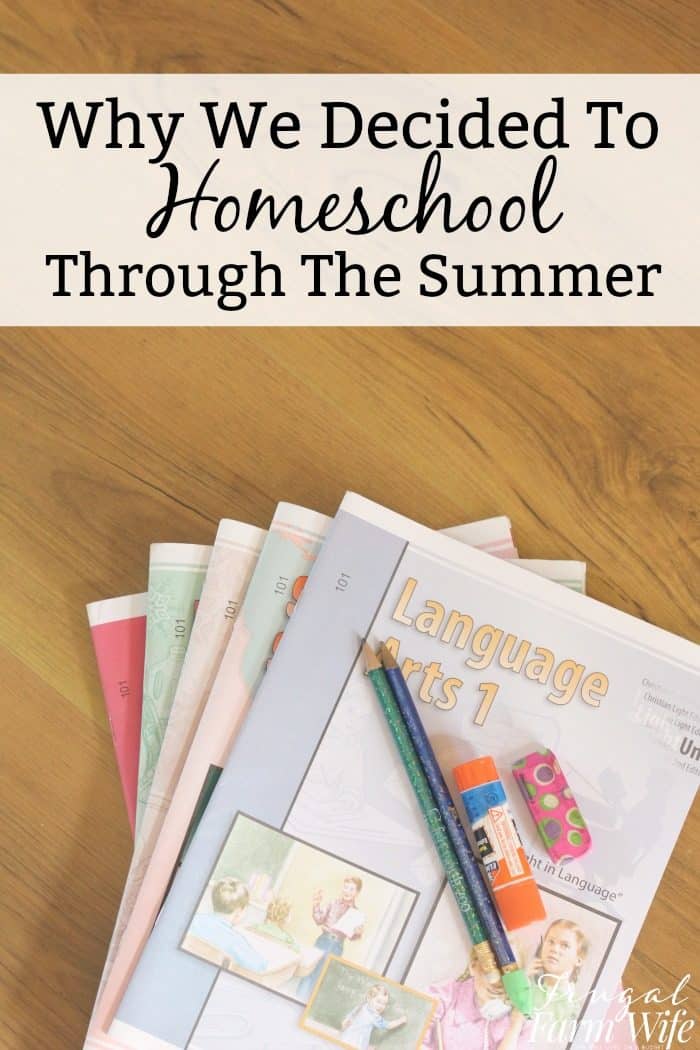 While other moms were breathing sighs of relief that the school year was finally over and their break had begun, I was biting my nails, worrying about getting behind, or my kids forgetting what they’d learned during kindergarten/preschool.

But while those things did factor into our decision to school through the summer they weren’t only reasons by far – or even the most important.

Why We Decided To Homeschool Through The Summer

To give us a “cushion” going into the school year. While the fear of getting behind wasn’t THE reason, it was a factor, so it’s worth mentioning. life happens, and things come up during the “real” school year, and we don’t always get our perfect school week, so it’s nice to be a bit ahead of the curve, and not have to worry about it.

To keep progressing instead of regressing. While it’s totally normal to forget a few things during the summer – which is why the school year starts off with review – at this age, I wanted to keep reinforcing what we’d already learned, as well as keep the progress going. I’m happy to say that Garrett’s math and reading skills have both increased like crazy this summer! 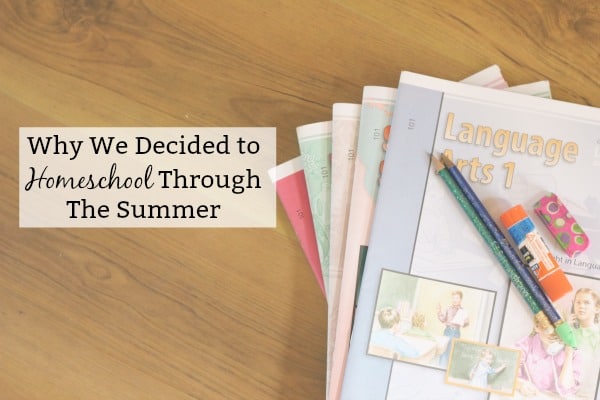 I wanted time to test new curriculum. I knew that if I waited until September to start a new curriculum, only to find out it wasn’t a good fit for us, it would cause a lot of stress as we scrambled to find a new one. Instead, I ordered curriculum samples in May, and started going through them, and had one picked out by mid June. Whew!

As a result, the kids need something to do inside. After watching them play with legos, build forts in the living room, and all that fun stuff that kids do, and then watching it devolve into bickering and fighting, and begging for video games, I realized that as homeschoolers, we could turn the summer heat to our advantage, get ahead on school work, and in a few months, take time off when the weather’s nice.

Because I wanted to. I like to keep our daily routine somewhat steady, so I’m not a huge fan of the twice yearly shake up from five day a week school, to no school and vice versa.

With all that said, we did take somewhat of a break, finishing our kindergarten curriculum in April, and starting first grade just over a month later at the end of May. We call it “1st grade lite”, focusing on math and reading, and adding in other subjects if we have some extra time.

It’s a big sigh of relief knowing that we’re going into the “real” school year with a head start!