You are here: Home / Family / 5 Easy Ways to Get Started Decluttering

Are you living with too much clutter but not sure what to do about it? Here are 5 Easy Ways to Get Started Decluttering. 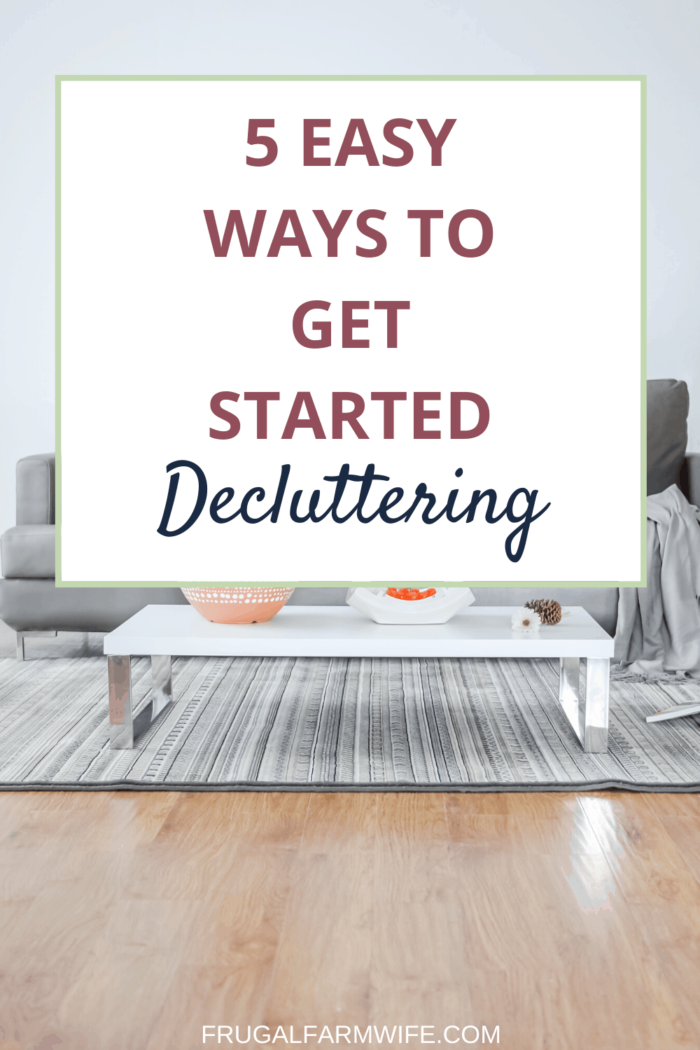 So far this week I’ve thrown out approximately 50 of the kids drawings and coloring pictures, used homeschool worksheets, several broken toy pieces, and who knows how much junk mail.

This doesn’t even include the fact that we took down a big chunk of ceiling so a repairman could find the root of some electrical issues we were having, so now we’re throwing away broken ceiling boards.

The point is, decluttering is a constant process. There’s no point at which you can sit back and never have to worry about clutter creeping up on you again.

Unless maybe you live alone and are a hermit, in which case, you’re probably not reading this email.

But most of us have our own stuff-gathering tendencies, kids, and, dare I say, spouses to contend with. So clutter is a constant battle.

I don’t say all this to discourage you, but rather to let you know that if you struggle with clutter, that’s perfectly normal. We all do.

But you can get ahead of it, and once you do, stay ahead. And that, my friends, is sweet victory.

When your decluttering job for the day is simply sorting through the pile of junk mail. Or your weekly sweep through the “artwork” basket (honestly, how many paper airplanes do we need?).

Initial decluttering – getting rid of all the stuff you’ve collected – can be really hard. We have emotional attachments, or maybe we don’t want to admit we shouldn’t have bought that. But living with clutter on a daily basis is also hard – and clutter costs you money. So choose the “hard” that serves you best in the long run – decluttering.

Of course, it’s the getting started that is hardest. So let me encourage you with some easy ways to do just that:

5 Easy Ways to Get Started Decluttering 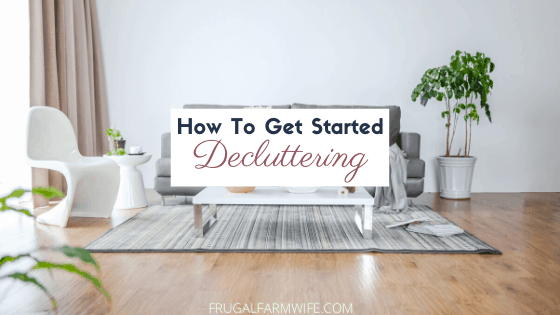 But the most important thing you can do for long term decluttering is establish good habits.

Get in the habit of immediately dealing with items you see out of place. If the kids have left toys in the kitchen, I call them back to clean up the minute I see those toys (otherwise the entire toy box ends up on the kitchen floor).

If Gabe has left a tool out, I set it on his desk or right by the door so he – or whoever goes to the barn next – can easily pick it up and take it out.

We all, always want a clean house, but remember that there will be seasons where you house will look like a tornado went through it. I always say I’m fine with a mess, as long as it’s a work in progress.

Which is why the stack of ceiling boards isn’t bothering me right now – because the ceiling is a work in progress. Now if they’re still there in a month, that’s when we have a problem.

For a long time, I hated doing things like canning, baking, or food photography, because it made such a mess, but now I realize messy days can be cleaned up, and as long as I’m in the habit of cleaning up after myself, we can stay on top of the clutter monster.