You know something? Meal planning is not a walk in the park. Coming up with ideas is pretty easy, but executing them is a little different.

I think part of my problem is now that I’m publishing them, I feel like I have to make them interesting and come up with something different every week. But’s really just not me, especially right now.

We bought a 40 year old mobile home last week, and it’s kept us incredibly busy this week getting ready to move – which is much more of a chore than we thought it would be what with the welded metal skirting, and attached metal porches and car port.

Making creative meals is just not a high priority at the moment. 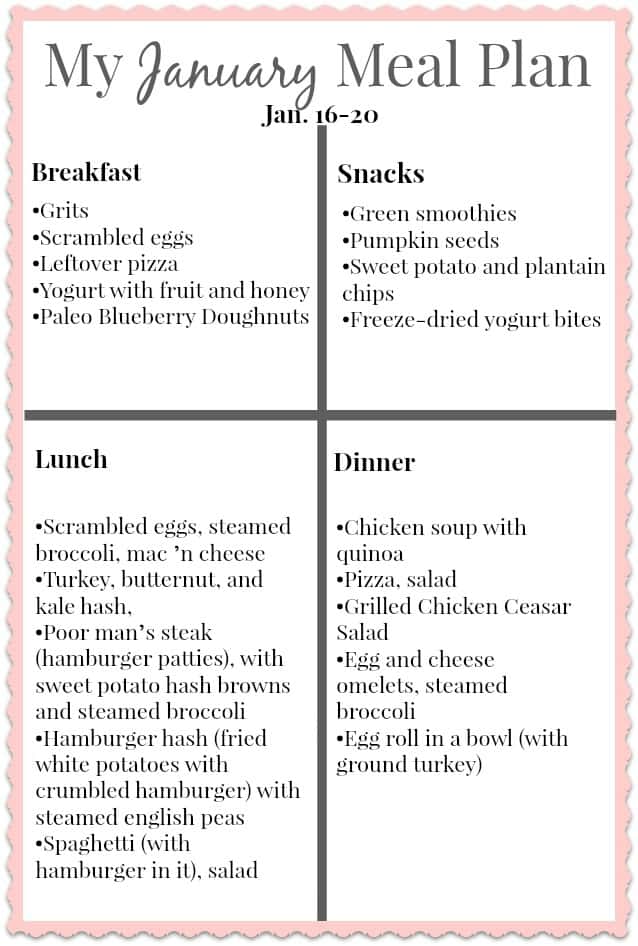 However – and this is kind of a big deal – I’m currently reading It Starts With Food, the original Whole 30 book, and man, it’s good! Now I finally understand why I react to oatmeal and not wheat. While my husband has celiac disease (thus the massive gluten-free recipe collection), wheat isn’t the only grain that causes digestive problems.

Anyway, I digress. The point is, as soon as I finish it, assuming we get the mobile home moved and clear a little mental space, I plan for the kids and I to go on a Whole 30.

At first, I wasn’t going to include the kids in my health tangent, but with Garrett having dark circles under his eyes, and Hadassah having a sudden outbreak of eczema (eek!), I decided it could benefit them too.

So fair warning – Though I suspect I may have to modify the diet to match their energy needs, the meal plans are going to get very Whole 30ish in the next few weeks – right about the time everyone else in the world is finishing theirs. 😉

Before we get started, don’t forget:

As you can see, we only had the kids beloved grits/oatmeal once this week – yay! But on the other hand, they had pizza for breakfast too, so I’m not sure whether it’s a win or not.

We took a combination of our coconut flour cupcakes, and paleo chocolate cupcakes recipe to create a paleo baked doughnut as well. That’s probably a recipe I need to nail down and publish here not eh blog – They were yummy – especially with the blueberries added!

So, lunch #1; I forgot to thaw meat, so we ended up having scrambled eggs with our mac ’n cheese. How weird is that combination?

The spaghetti was actually rotini pasta, which I almost always use because it’s easier for the kids to eat without making a mess – but they call it spaghetti.

I am trying to steer the kids toward more whole 30 type recipes so their taste buds aren’t completely shocked when we start the diet, and they’re okay with a lot of it, but Garrett really hates salad. He sat at dinner and picked his lettuce and spinach leaves out one by one until they were gone and I was finally able to enjoy the chicken, cheese and olives that were left.

I’m hoping he’ll come around, but fortunately, he will eat chopped, cooked kale easily enough if it’s mixed with ground beef or turkey, so I’ve taken to adding it to nearly every ground meat dish – even tacos!

I personally try to eat a large salad, and either another dish with cooked greens, or a green smoothie, so even if there doesn’t seem to be a lot of greens on the menu, believe me, they’re there!

As I was sitting here writing out the grocery list for this menu, I was astonished by how long it is! I guess I don’t think of it being that varied because I don’t pick up that much of a variety when I’m shopping. For instance, here’s our haul for this week: 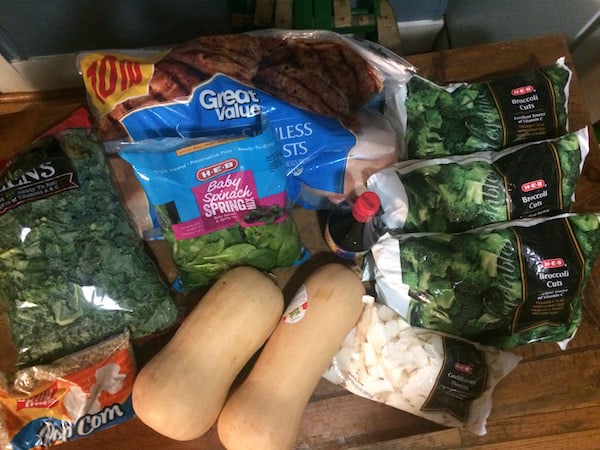 Everything else came from the pantry/refrigerator/freezer.

I froze half of the ground beef from last week, and still have cabbage and sweet potatoes from previous shopping trips, the ground turkey is coming from a stockpile in the freezer, I make my own yogurt, and the list goes on.

The only thing from this week’s shopping trip that will be gone by next week is probably the butternut, and spinach. I mean, look at that bag of chicken! That bag took up almost half of my grocery budget, but I can guarantee you we won’t be buying chicken for a few weeks, or maybe even a month – I probably won’t even open it for another week or so since the last package isn’t empty yet.

If shopping is the same way for you and you want to use this menu, simply print out the shopping list and cross out the items you don’t need. 🙂