You are here: Home / Live Well / Cloth Diapering / Preparing For Baby On A Budget Part 2

Hey all! I’m back with more about preparing for baby on a budget. If you miss part one, go here to read it. I’ll wait for ya. 😉 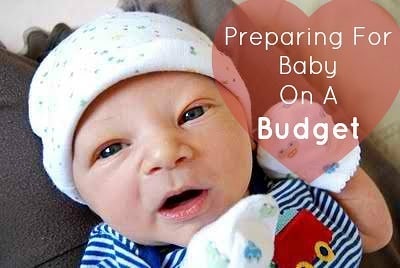 It’s crazy how much you can spend on getting ready for a new baby. The shear volume and diversity of baby gear out there is just mind boggling!

So what does a new baby really need beyond diapers, clothing, and a car seat?

We were really blessed to have a lot of friends and family who’s babies were outgrowing a lot of things when we were expecting Garrett, so we got to sample a variety of stuff and figure out what worked best for us.

Obviously, those aren’t the only things we have, but they’re the things I’d really hate to do without. You might notice the absence of a crib on that list. Garrett sleeps with us. We do have a pack-n-play that’s supposed to be his bed, but I couldn’t sleep for worrying about him getting cold over there by himself. (It’s warming up again though, so now we’re trying to decide whether to pull out the Pack-n-play again, or just put a crib mattress on the floor.)

I can’t stress enough the need to start baby shopping early on. That way you can walk away if the price or quality isn’t good enough, because you don’t have any immediate pressure to buy. Those things that you need or want to buy new are destined to hit their lowest price sometime in the nine months that you’re expecting your baby, and since thrift stores and yard sales don’t have a predictable inventory, you may not find what you’re looking for right away.

Finding Bumbos for $10 at yard sales is pretty routine (I got a BébéPod for $2 before our second child was born!). I often see good strollers and pack-n-plays for $10-$20 at yard sales, craigslist, and second hand stores as well. Look around. You’ll find it!

One thing you do want to make sure of, if you buy car seat, strollers, high chairs, etc. used, is that the item has good structural integrity, and that it can be sanitized. I found a car seat that I was satisfied with at a second hand store a few weeks before Garrett was born. When I got it home, I stripped all the cloth off and threw it in the washing machine, and then cleaned the rest of it with bleach.

So what are your ideas for saving money on baby gear? I’d love to hear them!