You are here: Home / Farm Life / Why You Might Want To Raise Ducks Instead Of Chickens

I still remember it plain as day.

My husband came in the house and said “I just ordered one hundred ducklings”.

It may have taken a few minutes to get my jaw off the floor, but eventually, I got around to asking him what in the world he was thinking. 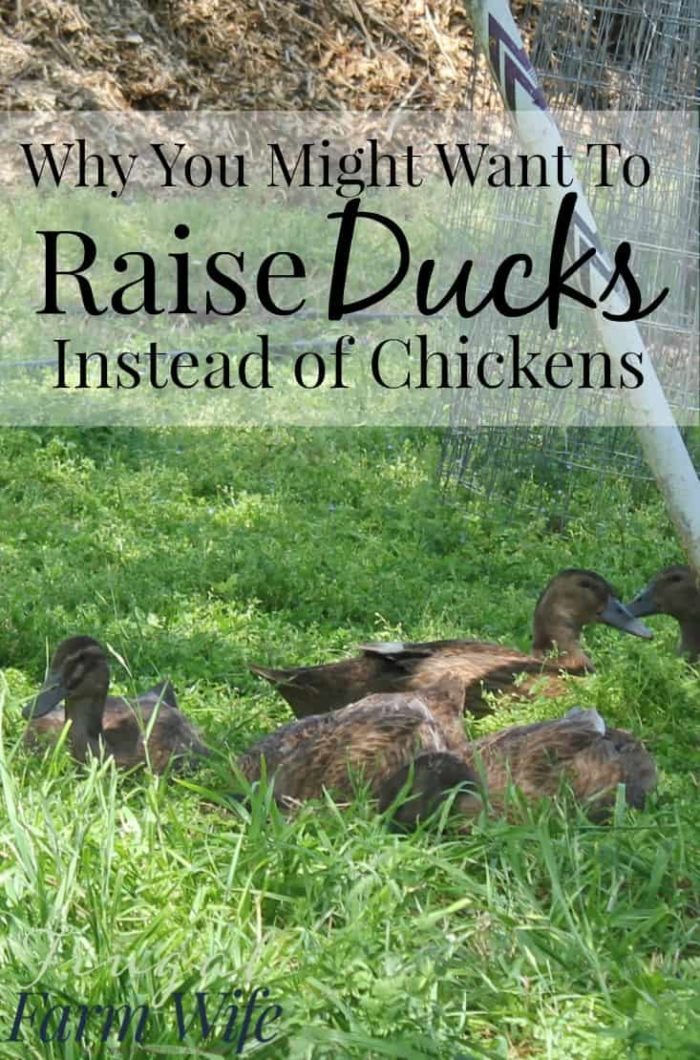 It was pretty simple really: not everyone can eat chicken eggs for one reason or another.

And now, funnily enough, six years later, my husband is one of those people.

Yep. He got a legit allergy test and everything. he’s allergic to chicken eggs.

A few weeks ago, I shared that I still insist on having a few chickens for myself (as well as for the kids since our current batch of ducklings aren’t laying eggs yet) because I prefer the taste of the chicken egg yolk to the duck egg yolk, which is mostly only noticeable in fried over-easy eggs. Duck yolks are just so rich! And it’s easy to have both since they eat the same rations.

But that doesn’t mean I don’t love ducks – I do! They’re so sweet, quiet, and completely lovable, and there are a number of reasons why a person might want to raise backyard ducks rather than backyard chickens.

Why you Might Want to Raise Ducks Over Chickens

Food Allergies. I kind of addressed this above, but many folks who are allergic to chicken eggs, can handle duck eggs just fine. It’s a huge blessing to us food allergy families!

Duck eggs are fabulous for baking. Their richness, and high protein quality give baked goods a high rise, and delightful texture. Once you try baking with duck eggs, I promise you’ll never want to go back!

Ducks Are Quiet. Ducks quack – actually, they quack quite a lot. A few nights ago, we had their pen situated right outside our bedroom window, and we drifted off to the sound of soft quacks and clucks. But while they do spend a lot of time “talking” they talk quietly – no cackling, carrying on about the egg they just laid or the child who just spooked the living daylights out of them.

Their quietness is a huge bonus for those of us who live in neighborhoods – and yes, you can raise chickens (or ducks) even if you don’t live on a farm!

Ducks stick together. Unlike chickens, you can actually herd them. In fact, just five minutes ago, I stepped outside to see that all of our ducks had waddled out of their pen and parked themselves under the kids’ swing set. Apparently a certain two-year-old had opened a gate. Naturally, I hollered at Gabe, who walked outside and shooed them back into the pen without any problem thanks to their flock mentality (and by the way, that little incident was totally the inspiration for this article). 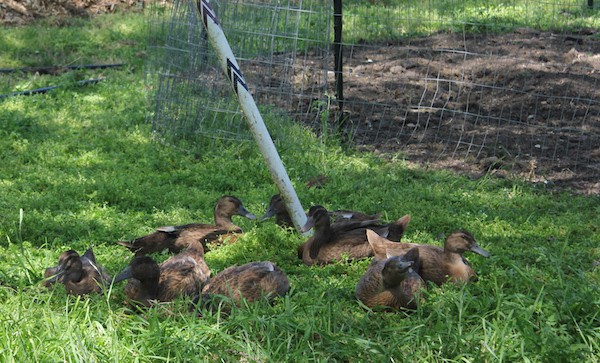 This extreme flocking together has been true of all of our ducks over the last six years regardless of how long they were out free ranging, though they do tend to split up into smaller groups when you have a lot of them.

Ducks don’t go ever fences. No wing clipping needs, ducks won’t even try to fly over a fence, which makes them so much easier to keep inside. We’re currently keeping our ducks in a temporary wire fence so we can move them, and it’s about four feet high – that would never keep a chicken in!

Ducks won’t terrorize your garden. Yup, that’s right! They done’t eat broadleaf plants. So while your ducks may waddle through and scare the dickens out of your, their really only eating out small weeds (grasses), and looking for bugs. I use to freak every time I saw them out in the strawberry patch, but I finally got over it. 🙂

Ducks love wet weather. If you have chickens, you probably know that they don’t care for rain, preferring to hid in a dry spot until the shower is over, which can greatly impede their foraging. On the other hand, when it rains, ducks couldn’t possibly be happier! It’s so fun to look out the window on a rainy day and watch the ducks forage around the backyard as if nothing at all is going on.

Ducks are cute. Yes, this is an actual, real reason why you should raise ducks. They waddle, they quack, they follow you around, and really, they just couldn’t be any cuter if they tried. I have noticed that egg laying breeds tend to be a little more drab looking than some of their fancier relatives, but they make up for it by being adorable.

Probably the only real drawback to having ducks is their love of water. Most folks think they need water (which makes sense, right?), but they can – and do – live quite happily on land. Still it’s nice to give them some water, and that can easily be done with a small watering trough, or child-sized swimming pool – those hard plastic things you can pick up for $5-10 dollars in the spring.

We don’t have one hundred ducks anymore – thank goodness! – in fact, our newest flock is only eleven strong, and I can’t wait until they start laying this summer!

So what do you think? Would you try raising ducks?