As I mentioned in last week’s meal plan, we’re gearing up for a Whole 30, starting next week.

Ironically, the book, It Starts With Food tells you to start right away, but for starters, I had to go shopping before we could make the switch, and secondly I felt like it would be too abrupt a change for the kids, so we’re taking this week to transition, and this week’s grocery haul reflects that – it’s mostly vegetables!

Part of me is terrified at how much this is going to cost, but I’m hopeful that cutting out whole food groups – dairy and grain – will help offset some of the expense. *gulp* 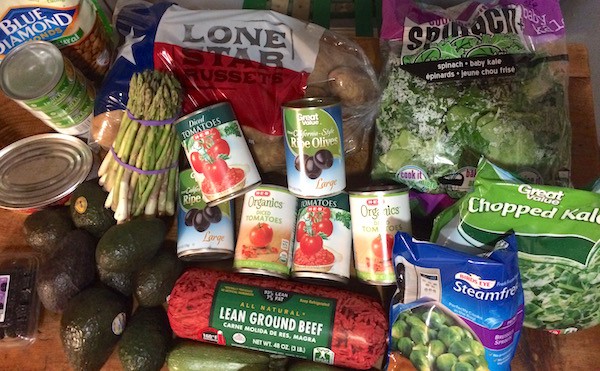 Protein: Despite not wanting to overspend, I went ahead and splurged on lean ground beef today, although to be honest, I already had buyer’s remorse by the time I got to the cash register, and if it hadn’t been so late, I would have run it back to the meat case and picks up a cheaper package instead.

On the bright side, it will be nice not to have a pool of tallow left in the skillet when I fry beef for a while!

Obviously, this isn’t a lot of meat for a Whole30-ish meal plan, even with the tuna and sardines in the picture, but with eggs from our ducks and my mother-in-law’s chickens (she uses some or our duck eggs, we use some of her chicken eggs), plus all the chicken I bought last week – and still haven’t opened – there’ll be plenty.

Almonds: During the Whole 30, I think nut butter snacks – such as apples with almond butter – is going to be key for keeping the kids satisfied. But since there was only one (expensive!) option for no-sugar added almond butter at the store, and I’m having a hard time finding it for a good price online (sources anyone?), I bought large bag of almonds to make my own. We have a Ninja blender that up until now has been a waste of storage space in the cupboard, so I’m hoping it will earn its keep here.

Produce: I’m terrible at buying the same vegetables over and over again. I mean, frozen broccoli is cheap! But I’m working at getting more of a variety in our rotation. Here we have a spinach/baby kale mix, frozen chopped kale (great for smoothies!), Brussel sprouts (one of my kids even likes them!), asparagus, canned tomatoes for cooking, olives (do those even count as produce? probably not. I got them just in case I need them sometime soon), potatoes, avocados, and blackberries.

For me, that’s diversified! Especially considering that we already have carrots and cabbage in the fridge, and broccoli, cauliflower, kale, and spinach in the freezer.

Another thing I did different this week was buy a few large Haas avocados. Even on sale, they were three times the price of smaller avocados, but I wanted to see how they compared – I mean, if the seed is small enough, they may end up being the same price per ounce of edible flesh. Avocados are one of the few green things that both of my kids willingly eat, so they’ll make great, filling snacks (I hope).

One of the things I have to decide going into this Whole 30 is how much I’m willing to spend.

At first, I was stressing out a little bit because grass fed beef is a minimum of $5 a pound, and I don’t know about your husband, but mine does not know how to restrict his beef intake, and it gets reaaaally expensive.

So I’ve kind of decided to just set a budget limit for the whole 30 days, and get what I can with that – and it may end up being crummy beef, but it is what it is.

Anyhoo, like I said, this week is gearing up for the Whole 30, not on the actual Whole 30 yet, so here we go:

(Note: I usually only plan for Monday through Friday, and eat mostly leftovers and church potluck on the weekends, but since we’re going into the Whole30, I’m going to start doing 7 days a week… for now.)

On Wednesday, we finished up the last of our yogurt, and now, our breakfasts are officially dairy-free!

I’ve found two ways that Garrett will willingly eat eggs – one is scrambled with cheese, and the other is fried, as long as the yolk isn’t runny.

We used coconut flour to make the chicken nuggets paleo/whole30 approved, which was okay, but next time we’ll try almond flour, but my favorite recipe experiment was the coconut flour wraps! They tasted a little bit coconut-y when they got cold, but they were awesome warm!

Gabriel’s parents gifted us with a few beef steaks. Yum! The yellow squash came from a box of produce the grocery store was throwing out, and it was yummy! At least I thought so. Too bad I was the only one. The kids weren’t impressed at. all.

I tried making almond butter for the first time this week, and it was kind of a fail – more pasty than buttery – though I have to admit it was yummy to eat with a spoon. . I read that it blends faster when they’re roasted, so I may try that next time, I also ordered some cashews to try making cashew butter with.

One of the tenants of the Whole30 is that you don’t make healthy replacements for junk food – like homemade sweet potato chips to replace packaged potato chips, but I feel like for the kids sake, I may need to anyway to keep them satisfied, because let’s face it, they’re young and growing, so meat and broccoli probably aren’t going to cut it for them. They need more carbs!

Okay, so this week’s printable packet won’t include a shopping list, because what with getting ready to move our new house out to the farm this week, I ran out of time!

But you can get the printable menu plan, and the plans + shopping lists from previous weeks by entering your email address below. 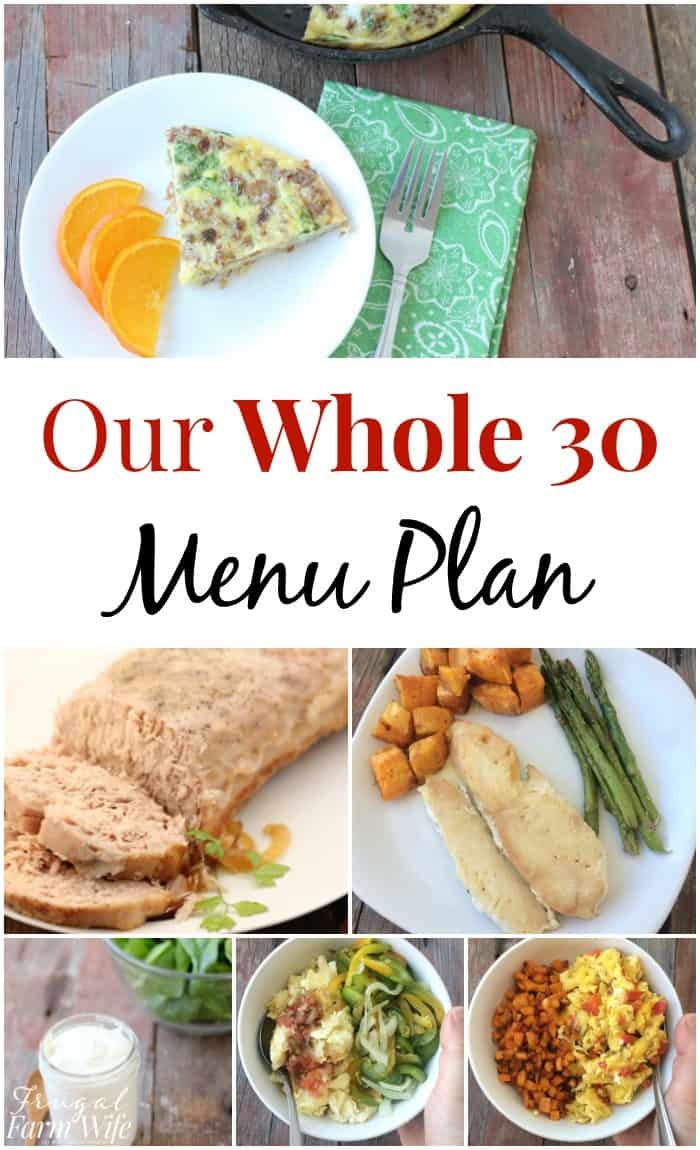 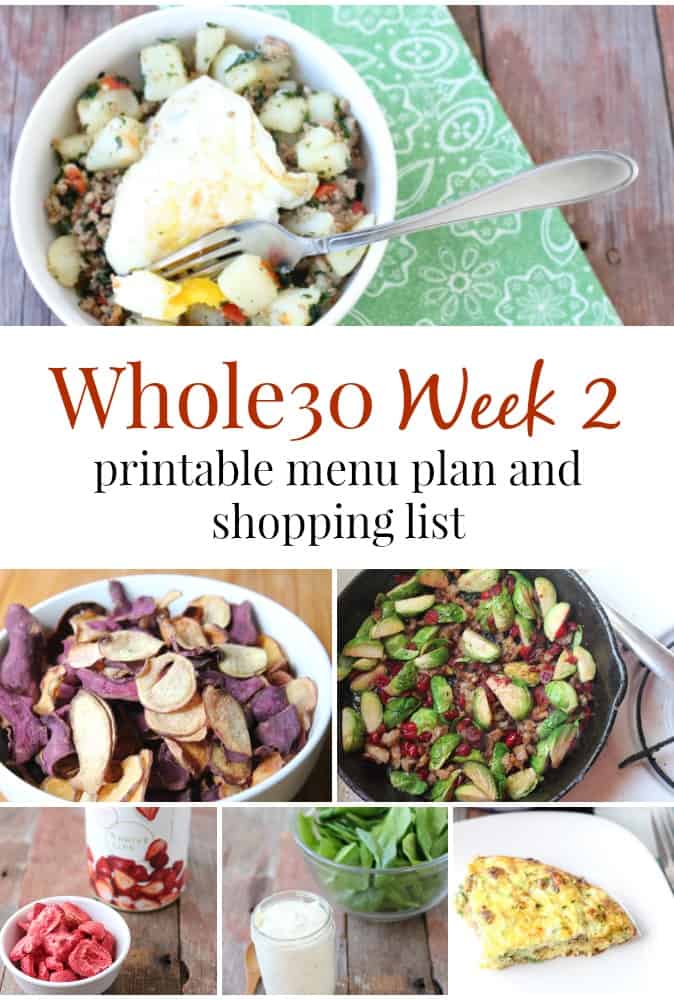