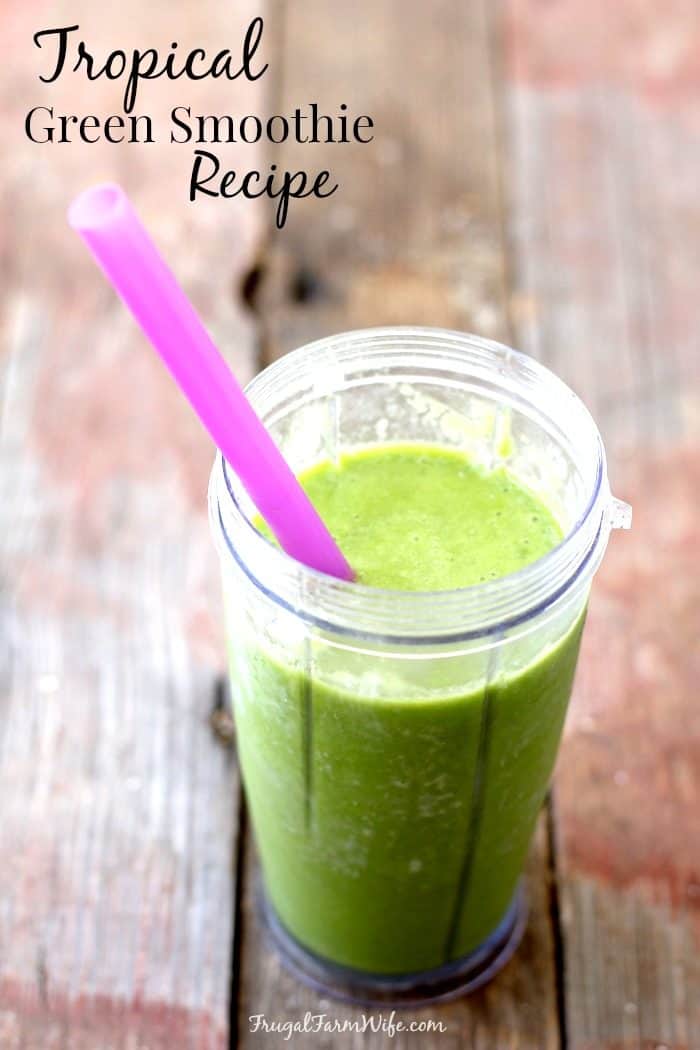 A few years ago, I bought in to the smoothie craze, and found my favorite healthy smoothie recipe ever.

I spent a lot of time saying ain’t no way I’m putting spinach in my smoothie, and turning my nose up at kale in general, but one day, I realized that all the ways I was trying to increase my consumption of leafy greens weren’t working, at least not consistently.

So I made a small smoothie, with just a bit of spinach in it, tasted it, and…

In fact, It couldn’t even taste the spinach.

And just like that, I was drinking a smoothie every single day, packed full of dark, leafy greens.

Kale, spinach, collards, beet greens, or anything else.

Green smoothies were my gateway drug to getting more nutrition for both myself, and my kids.

That initial smoothie was in January of 2016 if I remember correctly, and while I can’t say I saw an immediate, dramatic difference in my life, the daily smoothie did seem to be the catalyst that started me losing weight, and by the end of summer, I had lost almost 20 pounds.

By the end of summer, I had also settled on my favorite smoothie combination – this simple tropical green smoothie recipe – and we had even used it to replace summer popsicles with green smoothie pops.

Don’t worry, I’m not a mean mom, we do make popsicles that aren’t green sometimes – like these berry parfait pops. If you’ve been reading my blog here for any length of time, I think you’ll notice there are a lot of healthy recipes… and a lot of traditional treats as well.

I love gluten-free lemon bars, and Chocolate coconut No-Bake Cookies in all their sugary glory, but we do our best to balance it out with healthy recipes as well.

These days I try to save the sugary desserts for church potluck, but…

We’ve gone from making desserts at least twice a week, not counting decadent breakfasts like blackberry crepes, to serving frozen berries (raspberries are my favorite!) when somebody’s craving a sweet treat, and dealing in Real Food Meal Plans.

As much as I love the act of baking, I’ve learned to save the sugary treats for truly special occasions.

I promise you, it’s been a slow shift. Some weeks, filling my grocery cart with nothing but chicken, veggies, and some fruits. Then other weeks, throwing in the towel, and loading up on canned baked beans, mac ’n cheese, and chocolate chips to have on hand for impulse baking.

I’m not saying I’ll never fall off the wagon again, I’m not even saying it’s wrong to “fall off the wagon” on purpose sometimes, but I do think that all in all, we’re eating healthier and healthier, and ANYWAY, we’re supposed to be talking about tropical green smoothies here.

This – that is, the tropical green smoothie – is my favorite smoothie recipe.

I like to pick up a can of coconut water every now and then to make it a special, truly tropical treat, but for the most part, I use water.

If I’m feeling the need for a protein boost, I add a little greek yogurt, but for the most part, I’m not here to drink my calories – I like to eat too much for that – so I just use the basics, and I tell you what – the basics are TASTY.

That banana sweetens it, the pineapple gives it some tropical goodness, and the greens give you super powers or something like that.

(actually, they’re anti-inflammatory, and full of crazy amounts of vitamins, and other things I’m not really qualified to talk about.)

One of the BEST things I’ve ever done is freeze bananas for smoothies to make it super easy to reach into my freezer for a few chunks of banana without any fuss. And we all know, the easiest way to be consistent with healthy habits, is to make the healthy habits easy!