You are here: Home / DIY / Farm/Garden / How To Grow Potatoes In Containers

Have you seen those “how to grow a bazillion pounds of potatoes in a trash can” posts?

So cool, right? I don’t know about you, but I want to try doing it every year, so this year, we finally did it!

Unfortunately, it will be the end of summer before I can tell you how well it works, and by then it will be too late for you to start until next year, so I wanted to just show you what we’ve done so far, and link to a few instructionals you can check out yourself for more inspiration. 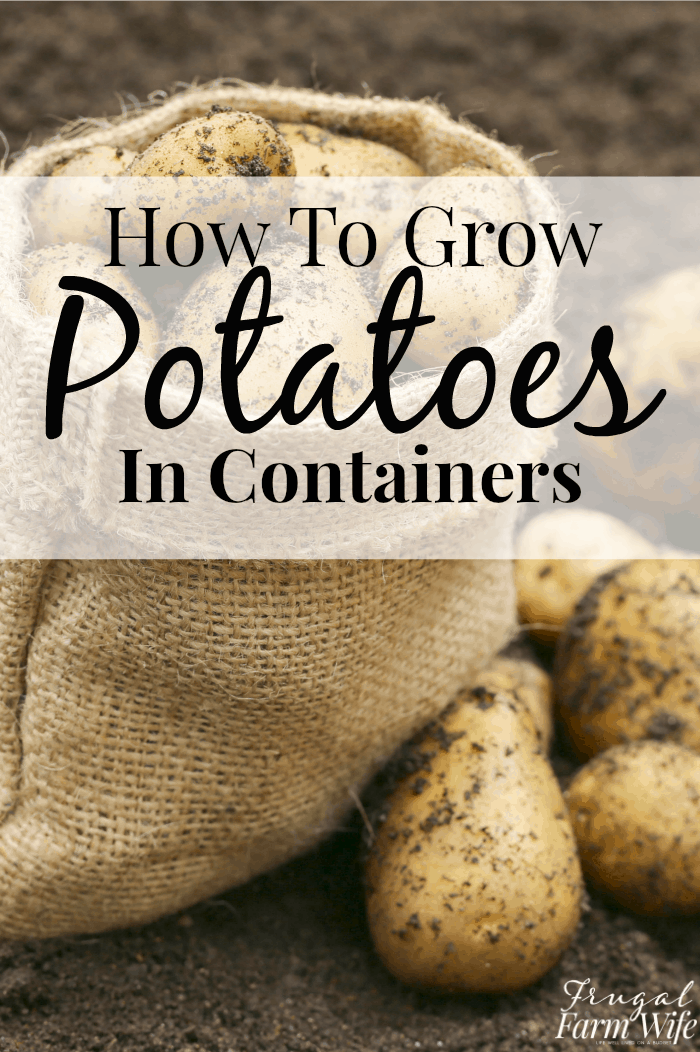 As a mom, gardening is kind of hard. I mean, it used to be a hobby back before I had kids, a house, and all the things that go with them.

So these days, I need my gardening to be über efficient. The more I can grow in a small space, the easier it is for me to take care of. The more methods I can find to save time, the more food I can grow.

The more food I can grow, the less we have to pay for truly high quality produce.

Not to mention, the kids get to experience the connection between the dirt and what they eat, and that’s worth a lot.

Get Your Garden Cheat Sheets!

Want to know exactly when, where, and how to plant your vegetables? Sign up to get our FREE companion planting guide, and garden planting cheat sheet printable.

So here’s what we’ve done:

You can see it all in the video below:

The rest of that pound of potatoes is being planted in a sub-irrigated garden bed (instructions to come next week). even though it’s a little late now to be planting potatoes in central Texas – but hopefully we’ll at least get some fingerlings out of them!

Use a drill or hammer and nail to make holes in the bottom of your container – you can see in the video that I used a paring knife because we had accidentally forgotten to bring our cordless drill batteries home from the house we’re renovating earlier that day. Oops!

Use Sterilized dirt – aka, dirt without weed seeds in it is best. here’s I’ve used mostly composted cow manure, which definitely has weed seeds in it, but since it’s a tiny surface area, and potato plants are easily distinguishable from weeds, I figured we’d just deal with it.

You’ll want to keep a container of dirt right next to your potato container so that you won’t be tempted to put off “hilling” them as they grow. You can’t get 50lbs of potatoes from one container if you let the stems harden before you add more dirt!

After your potatoes start sprouting, start building up your soil around them, covering the stems so only the top leaves stick out. You want to make a lot of room for potatoes to grow under the plant! 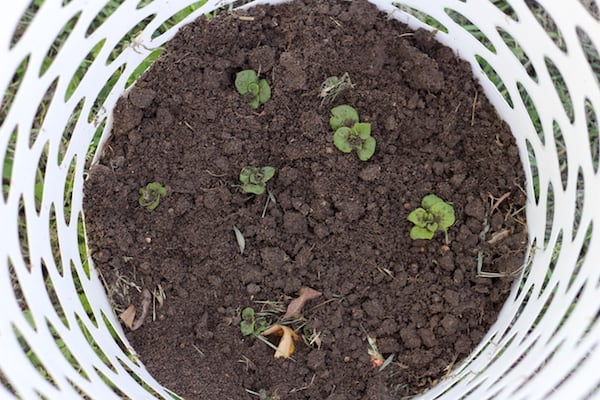 Update June 5th: After the potatoes sprouted, they were growing so fast we added dirt to them pretty much every day. Once the dirt was within two inches of the top, we stopped because the plastic basket was beginning to buckle. 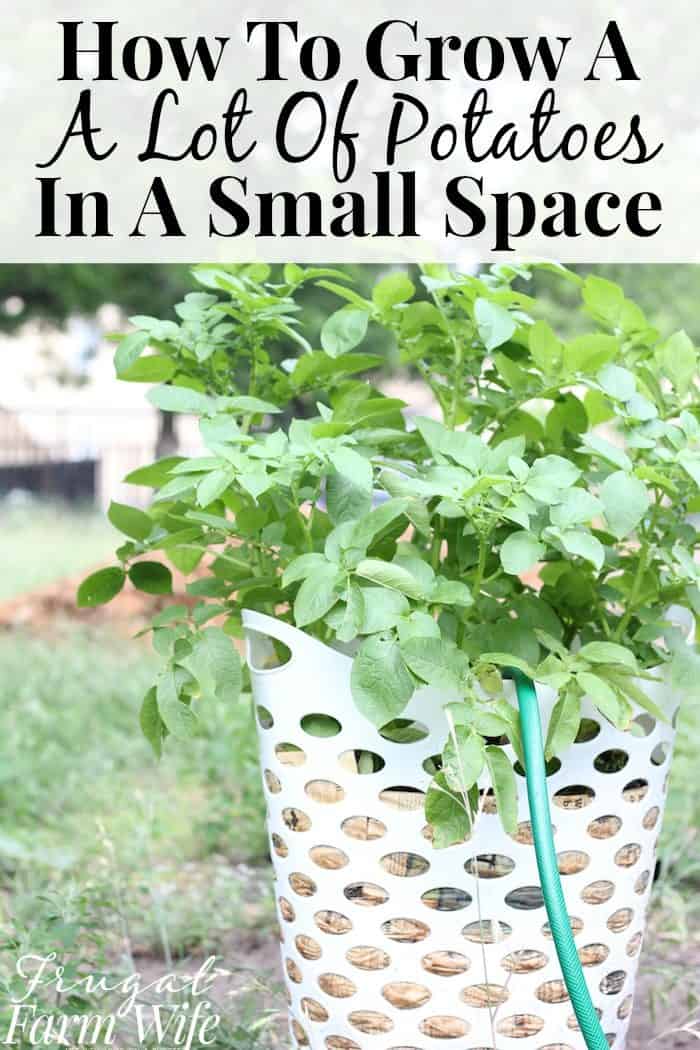 Using a laundry basket as your potato container is obviously a super simple, not to mention cheap solution – all you need to do is add a little bit of newspaper over the holes as you grow, and those holes make getting water all the way down to the bottom easy-peasy, but there are lots of cool DIY potato growing instructions all over bogland, and they are totally worth drooling over.

This one is beautiful, and makes harvesting a snap: 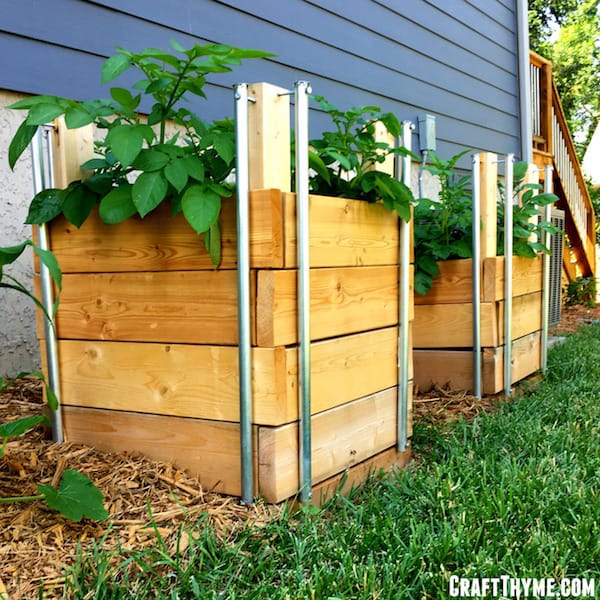 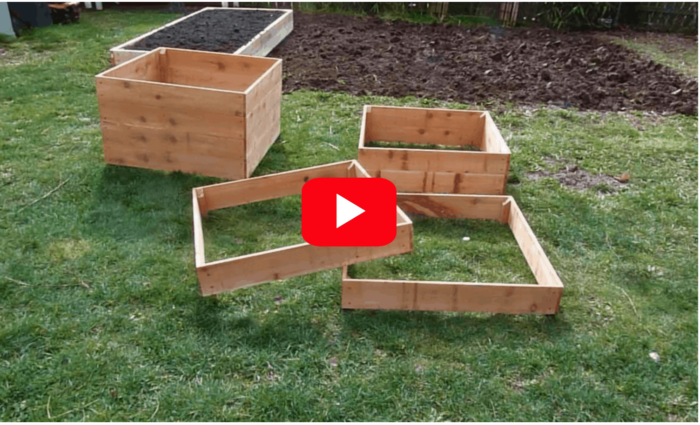 How To build Potato Boxes

This smaller scale version is perfect for your porch, and so cool!

How cool is this?!

Mine isn’t as pretty, but here’s hoping we end up with a bucketload of potatoes anyway!