You are here: Home / Canning/Preserving / Canning 101

I’ve always been hesitant to delve into the topic of how to can, but since canning has always played such a significant roll in how we store our food, I think it’s time to change that. It also happens to fit quite nicely with the whole theme of this website – being a Frugal Farm Wife. 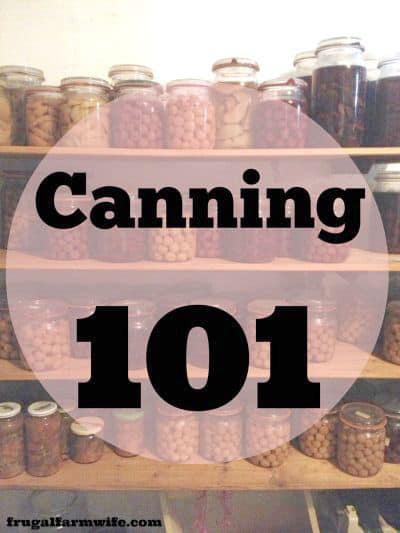 But the thing is, I’m not exactly a Ball Blue Book adherant. See, I grew up for the most part, in an Amish-ish community. Everybody canned, nobody used the Blue Book

(or any other book). There was nothing scientific about it. It was just something you did, like cooking dinner. That’s why I’ve been hesitant to address canning.

You’re not supposed to deviate from tested and true recipes, and what would happen if I put a recipe out there, and someone used it and it went bad? Now of course, I hope that people would use common sense when they open their food, taking appropriate safety measures before consuming it. But sadly, common sense doesn’t seem to be all that common. More to the point, since we modern folks tend to buy food that almost never goes bad (when’s the last time you opened a can of commercial tomatoes that was moldy?), we don’t think about it. Detecting bad food isn’t second nature to us anymore.

We can pumpkin (you’re not suppose to), we can meat without a pressure canner (you’re not supposed to do that either), We can marinara sauce (you guessed it, that’s taboo too), and soup, and gravy, and pie filing – all with homemade recipes. Not only that, I can’t name a single person who pressure canned anything for 90 minutes. 30 minutes, 45 even for some things, but 90 minutes? No. Never. We don’t necessarily sterilize our jars. Wash them, yes – although not necessarily right before we put food in them. It just depends on what we’re canning. 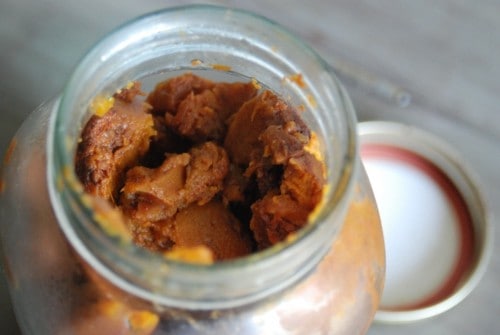 An open can of butternut squash with cinnamon – fantastic baby food!

See what I’m saying? I guess you could say we’re a bunch of canning renegades.

So maybe this can serve as a little disclaimer for future canning recipes that may appear on this site.

Nothing was tested, not even the ph of my tomato sauce. This is just the way I do things.

I can’t gaurantee that your food won’t go bad, but in reality, no recipe can gaurantee that. Use these methods and recipes at your own risk. Read up on canning safety, educate yourself, and use your common sense to decide what you should or shouldn’t do.

Always smell the food before dumping it out of the jar, and in foods that have the potential to grow botulism, always simmer them for at least ten minutes before you even taste it.

So now that that’s out of the way, here we go.

Ugh. So, this got really long, so what I’m going to do is come back later with articles on things like how to use a pressure canner, water bath canner, how to sterilize jars, and then hopefully, you’ll start seeing canning recipes!