You are here: Home / Save Money / What Is Your Number One Daily Money Waster?

Sometimes, I get the feeling that I’m slacking off in the frugality department, so I ask myself “what is your number one daily money waster?”

It’s not that I necessarily think it’s bad to splurge, or “waste” money on things you want.

But right now, I’m spending a lot of money on things I want (plane tickets, an international vacation), which means I’m looking for ways to save money on other things.

So I went to good old google, and asked it what American’s top money wasters are.

Here are some of the interesting results, and I’m just going to go down one of the lists (all of the lists had pretty much the same things on them, but in slightly different orders). 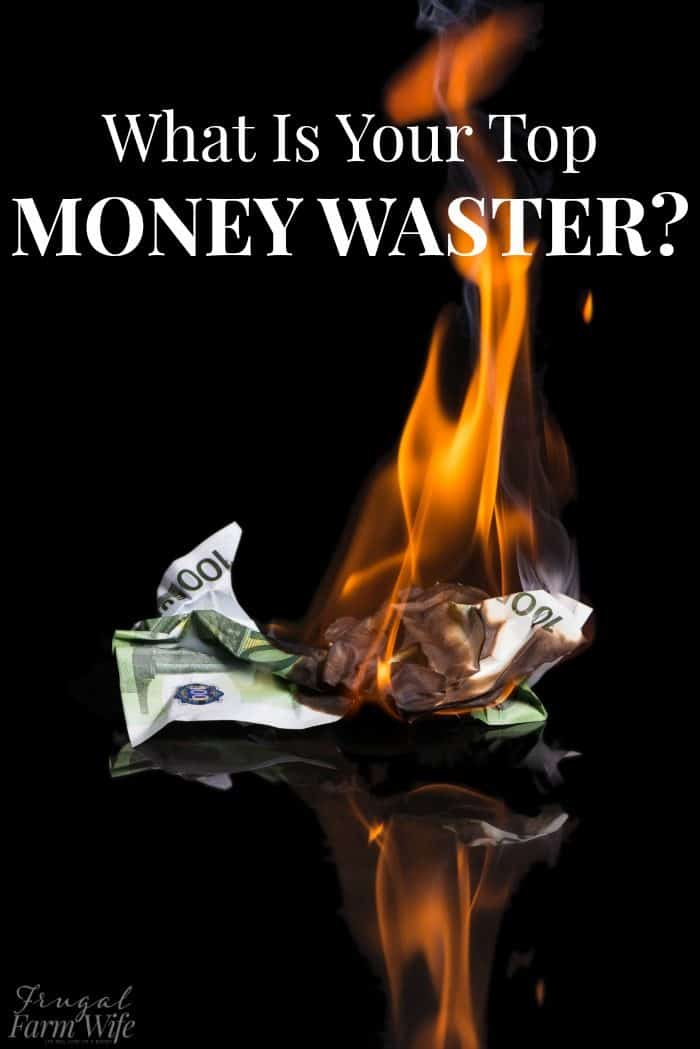 Eating Out. No surprise here. Eating out is fun! So naturally, we (as a culture) do it as often as we can. But honestly, we personally very rarely do it. Largely because of Gabe’s food allergies, it’s really not that fun for him.

Cigarettes. Nope. Never been a smoker thanks to my mom giving me the impression that cigarettes are evil (well, she’s not wrong I guess).

Throwing Away Leftovers. I have to admit I’m a little big guilty here. As much as I try to get leftovers used up efficiently, sometimes, there are things we just don’t care for, so we pitch them to the hogs.

Bank Fees. So far, I’ve managed to be responsible enough to keep bank fees at bay. That actually makes me feel quite accomplished. 😉 But seriously, there are so many bank fees that can get ya, from overdraft fees, third party ATM fees, or even just a checking account that isn’t free.

Workout supplements. I mostly agree with this one. First off, cheap, junk supplements are all too common, and unless you’re a professional athlete, most of us are just wasting our money on all those supplements.

This is me, drinking a protein shake in Gabe's Kydex shop, because it's the only place the kids won't see me. #notjoking #momprobs #protein #iifym #chocolate

Heating and Air Conditioning. I dunno… is this really a waste of money? While I spent my fair share of years living without air conditioning, I will readily admit that I have no desire to do so now, and it’s a lot easier to be productive when you’re comfortable.

Convenience stores. Sure, it’s convenient to pick up a drink or snack at the gas station while you’re there, but boy is it a money suck! I find that the best policy is to pay for my gas with a debit card and avoid temptation by not even going in.

The Lottery. Ha! Nope, never bought a lottery ticket. I did pick up a scratch ticket that someone had discarded one time when I was a kid, and won $5 (dad redeemed it for me). Naturally, I bought candy.

Buying Food that you can make yourself. I’m a huge fan of making things from scratch, and it’s saved me a ton of money over the years, but I also admit that I buy some food now – like tortillas – that are technically cheaper to make, but take a lot of time. I’d rather trade my money for extra time to spend with my kids or work – because I can make a lot more money in an hour of working than a package of tortillas cost me.

Not Returning Items. Yup. About a month ago, I bought some things, didn’t try them on because the kids were being crazy in the store, they didn’t fit, and they’re still waiting to be returned. Oops. But definitely not a daily money waster.

Bottled water. This is a HUGE money water! Or so I thought for so long. But that was when I lived in Tennessee, and every place I ever lived had either a nice spring or well on it, with excellent tasting water. Now, in Texas, the well water in both places we’ve lived has tasted terrible, and we finally started buying our drinking and cooking water. So yeah, it’s a day expense, but not one I’m willing to change at the moment.

Cable TV. Never having had Cable TV, I don’t really know how much it costs, but we do splurge on Netflix and Hulu these days. I’ll cancel Hulu after this season of American Ninja Warrior ends – or so I tell myself.

Trading in a car before it’s paid off. Well… for me, cars are for transportation purposes, and I’m just as happy to drive an old car that I paid cash for, as long as it’s comfortable, and gets good fuel mileage. My current car is kind of lacking in that last department, and I’d love to trade up – but we’ll definitely be working with a cash budget. Car payments are not your friend! (You can read my take on how to buy a used car here)

Dental Hygiene. They say that 3 minutes of brushing and flossing can save you thousands of dollars down the road. Oh how I wish that were true! On the other hand, I suppose my teeth could be in worse shape…. I don’t see how that’s a daily expense though.

I guess what all this means is that my own top money-waster is a combination of a little bit of a lot of things.

I guess I have some spending leaks to seal.

Do you have a top daily money-wasting habit?