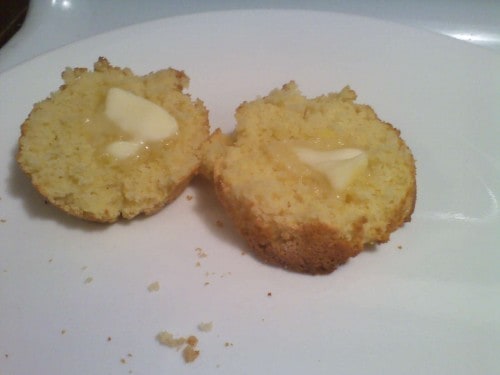 I’ve always been a bit partial to cut-out biscuits. Never liked making drop biscuits, even if they were just going to be covered with gravy.

Not a hard problem to fix, but I also finally realized something. Drop biscuits are not that bad. And the results are a lot more consistent.

Ironically, after all those batches of failed cut-out biscuits, drop biscuits have become the old faithful standby.

As usual, I left my camera …somewhere… so these pictures were taken with my phone. Sorry ‘bout the quality. :p

They’re easy, consistent, and fast. They don’t fall apart, and they’re not heavy. What more could one ask?

Well, we could ask that they be flaky, but lets get real. We’re talking about biscuits sans gluten here. From what I understand, gluten is an essential part of biscuit flaky-ness too bad for us.

So here we go, my version of gluten-free drop biscuits. I do mine in muffin tins so that they retain a nice shape. This recipe is adapted from our community’s cookbook.

mix dry ingredients together. Cut in butter/oil. Mix in egg and milk and divide among six greased muffin tins. Bake at 400 degrees for  approximately 15 minutes or until golden brown.

*If you want to use coconut oil, make sure it’s cold. I also recommend mixing it half and half with either butter (my preference) or lard.