Two years ago, we bought an old, ramshackle mobile home, and it was both one of the worst, and one of the best decisions we’ve ever made. 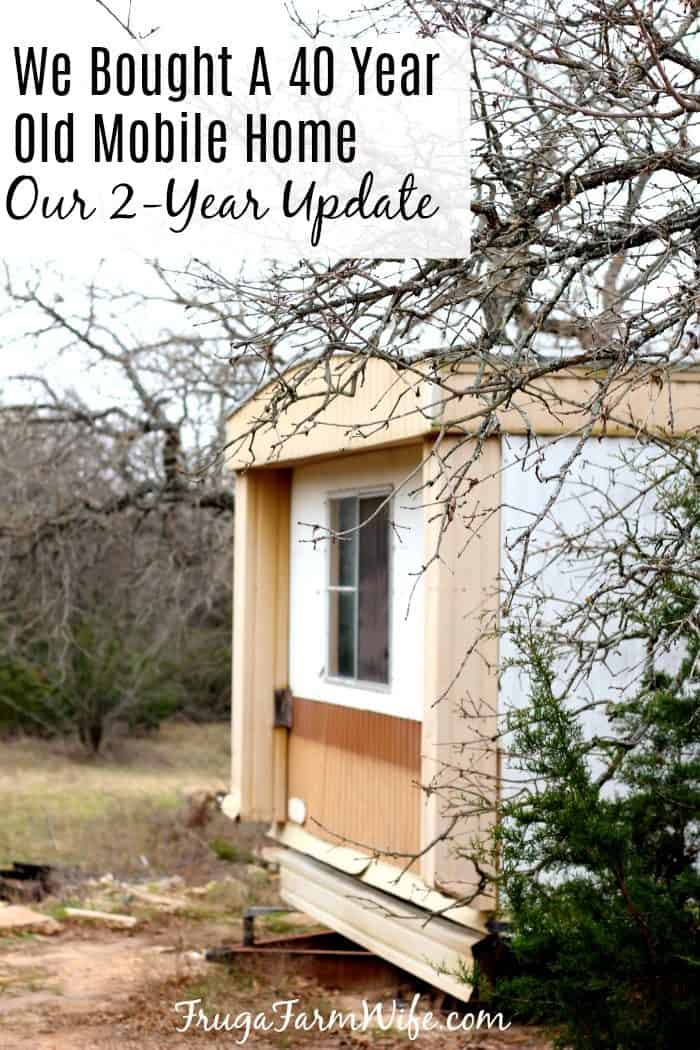 Repairing a mobile home isn’t as easy as it may seem at first glance – they’re not like stick built houses. Mobile homes have their own standards of measurement which make your average parts – like windows or doors – difficult to work with.

Add to that our mobile home being roughly 40 years old just compounds the problem.

When Gabe first had the idea of buying a mobile home to put on our section of the family farm, I spent a fair bit of time perusing ads for decent homes in our budget.

Gabe vetoed all of them. I think with mobile homes being so cheaply constructed he just couldn’t wrap his mind around putting $7-12,000 into one.

Finally one day an ad popped up as I was scrolling through Facebook for just $1,000. I showed it to Gabe, and he immediately called the owner.

the next day, the home – or should I say project – was ours.

We went into this knowing that our renovation skills were minimal, but determined to do our best.

First, we had to dismantle the skirting, get it unhooked, prepared our property, and finally move the mobile home out to our farm.

After that we began tearing into walls, floors, and ceilings with the intention of stripping it down to the shell so we could repair electrical wiring, build it back up with nicer materials, and basically have an all new interior.

But is wasn’t meant to be.

We realized pretty quickly that we were in over our heads. Neither of us have much experience or skill with carpentry and home renovating, so it took another month or two just to get the master bedroom subfloor redone.

In the end, we hired out the rest of the flooring project.

Then we started making some hard decisions about the rest of the house. 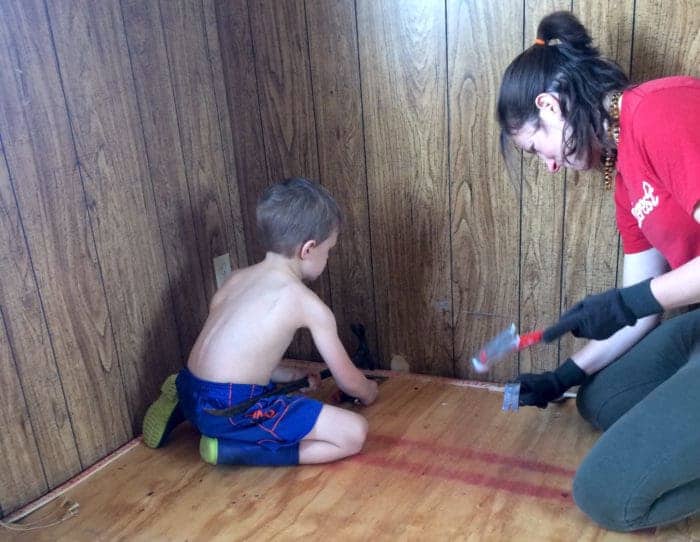 My hope was to drywall the entire interior, and Gabe’s plan was to build a freestanding roof over the entire house in order to shield it from bad weather, and make it easier to cool in the summer. 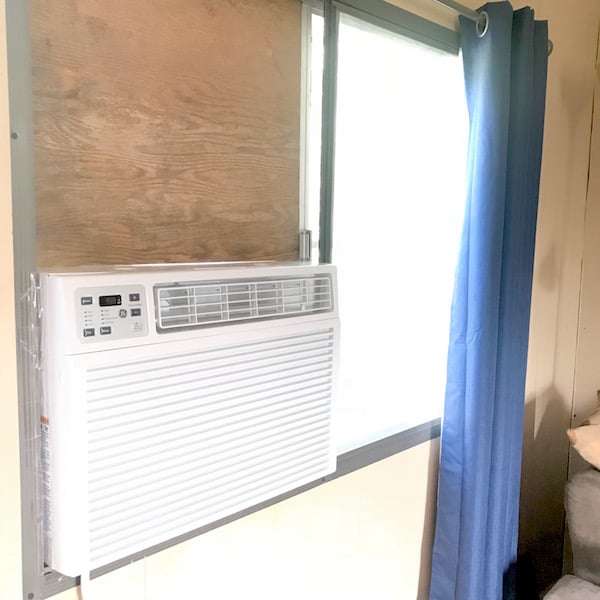 This mobile home isn’t nearly as hard to heat and cool as we feared it would be. I tried to get central heat and air put in, but aside from the cost, no contractors really want to work on a mobile home, so we ended up putting in two window units which have had no problem cooling the house, and the one in the living room has no problem heating up the main area.

The unit in our room however doesn’t heat as advertised at all, so we’ve added a few electrical space heaters, and I’m happy to say, they’ve kept us plenty warm so far.

One thing of note was that the electrical breakers couldn’t handle the stress of all those appliances, and Gabe ended up wiring additional lines just for the two window units. 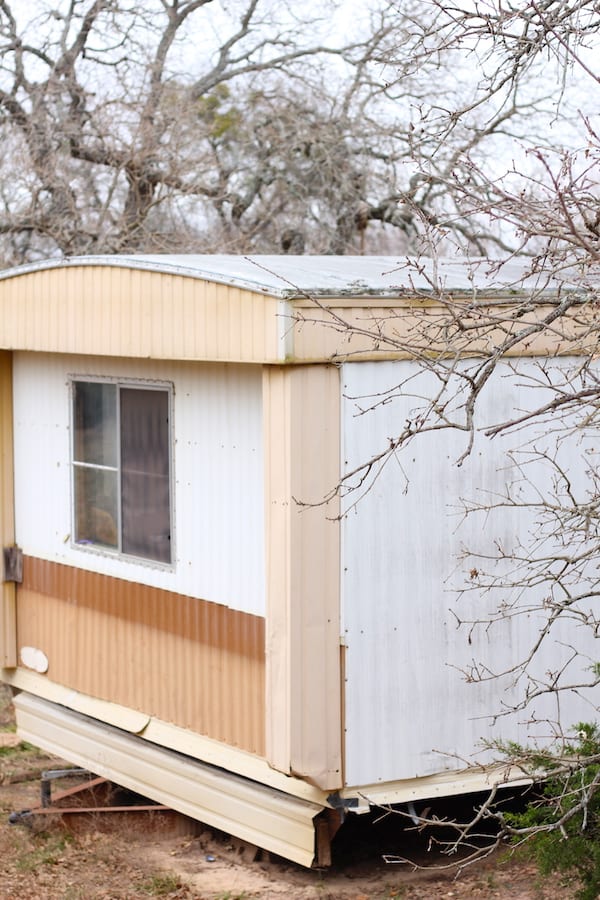 As I mentioned, we resealed the roof, knowing it was leaky (and the reason we had to replace so much of the ceiling!).

Unfortunately, that first resealing didn’t work very well, and our new ceiling now has the water damage to tell the story.

Running out into the rain to throw a piece of tin over a leak, and at one point having a bucket on the floor catching water in the living room was not a fun period of time.

But I’m happy to say that after a second resealing using a second brand of sealer, we seem to be leak free.

We’re replacing large chunk of ceiling in the living room, but I’m hopeful that we can simply paint over the rest.

But take note: if you ever buy a mobile home make sure your roof is leak proof before moving on!

There is no storage in a mobile home

We’ve done what we could to maximize space – optimized our closet, torn out the bathtub in the master bath (leaving the shower – so yes, we’re still getting clean ;)), removed the dryer in favor of laundry room/pantry shelving, and are working on adding more shelving.

I’m a fan of keeping things minimal. I operate best when I have clutter-free spaces, so while I find the lack of storage space challenging, I don’t necessarily see it as a bad thing.

I’m forced to purge, and get rid of things that we don’t really, truly need. I have to come up with systems to keep things organized or it quickly turns to chaos.

I’m okay with that. 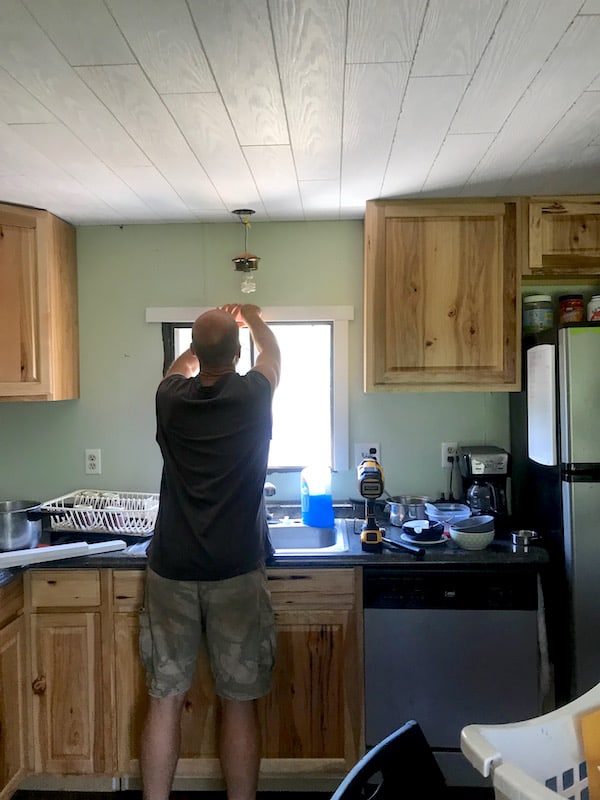 And we do have a barn, so storing things, like books, that we really do want to keep for later isn’t a problem.

Despite not doing the full dismantle and rebuild we had originally intended, our mobile home is nice (on the inside). We have all new kitchen cabinets (the originals were literally crumbling and mostly fell apart during the moving process), and nice kitchen appliances which was my biggest concern.

We’ve done some customizing, like tearing the old air HVAC/water heater cubby that took up a huge chunk of the kitchen out and replacing it with functional cabinets – the air ducts under the house rendered the system useless anyway, thus, the window units.

We now have a full-sized water heater in the back of our closet instead of the half-sized one that was in the cubby as well. 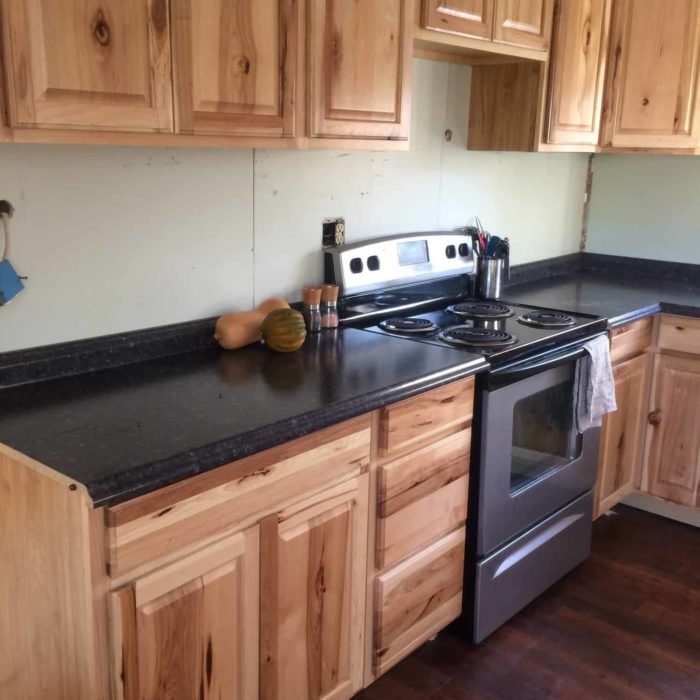 We installed lots of pantry shelves in the laundry room, which are handily right next to the kitchen which has worked well since I have a weird aversion to dryers and line dry my clothes anyway, making more room for shelves.

There’s no doubt that this house is more functional and easier to live in than our last rental home, and I have no regrets about the trade whatsoever.

However, with that said…

Knowing what I know now, I might choose to buy a newer mobile home that cost more money up front, but didn’t need so many repairs. It wouldn’t be as functional as our current home, because we wouldn’t have made modifications in our mobile home repair, but it would have been a lot less work. A mobile home that we could move on to our land and move into right away would have saved us several months rent, putting us ahead financially.

But with that said…

For several years, we’ve been renting houses, and even when our financial situation improved, they weren’t the best houses because we were trying to save money to “get ahead”.

This house is far from perfect. There are going to be things that we have to fix along the way. I may never find a way to make the window frames look nice.

It will always be a sow’s ear.

But I’m so glad to have a house that’s mine.

I can’t even describe the difference in my mindset from living in someone else’s house to now living in my own.

I can make plans, change things, take responsibility for the state of the house – I can do what I want.

I just put screws in the wall today, without even thinking about our security deposit, because we don’t have one.

I’m hanging things on the walls, collecting furniture, planning a fire pit for the back yard… all because we bought this old mobile home for a thousand dollars, (then put another ten thousand in it of course).

We’re tucking money away to fund investments because this little house has lowered our cost of living.

Sometimes I worry about what happens if it truly starts falling apart, or if we end up living here more years than we planned.

If the first scenario happens (most likely as a result of the second), then we move. We with the benefit of living debt-free/rent-free and the nest egg that comes with that.

So I’ll take the sows ear. It’s pretty rough around the edges, not pretty at all on the outside, the roof might start leaking again, who knows what else may happen.

But I’ll take it.