You are here: Home / Family / My Kids’ Favorite TV Shows

As a mom, I’ve struggled a little bit with whether or not, and how much I should be letting my kids watch tv.

For now, , our decision has been that a little tv time every afternoon while mom gets some work done is okay, and it’s one of the ways we get our kids to let us work. But we monitor each show, and often hit the pause button (on new shows) to talk about what’s going on. 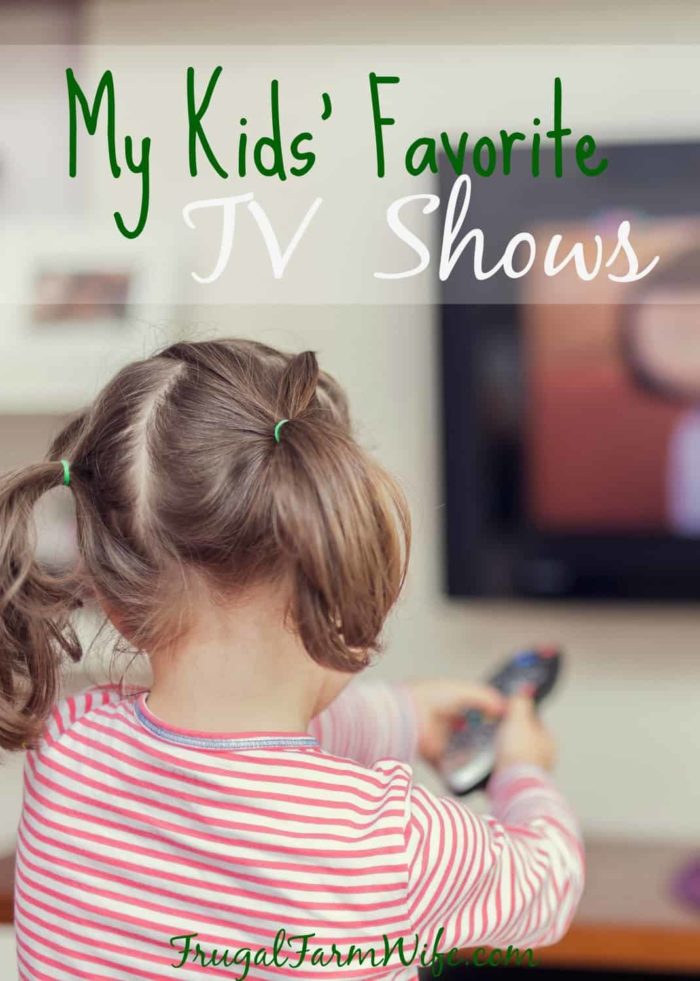 So with new shows, I sit in the living room with the kids and work on my computer so I can listen in. If I’m working in another part of the house, the kids can watch something that Gabriel or I can vouch for.

My mom wasn’t anti-tv, but the amount of it that she let us watch tapered off over the years until we moved to an Amish community when I was eleven, at which point, we had zero tv. I didn’t watch a single television show during my teen years.

And when we did finally leave the Amish lifestyle, the kinds of shows we watched were Old Yeller (I will never watch that movie again! Too much sadness.)

All that to say, I’m not exactly up on what the latest cool shows are. We just watch what we like!

These are all listed in descending order from the kids’ most favorite show ever – not  mine! (this list would look very different if we started with the show I wished like like the most!)

My husband says that it’s the most annoying show, especially Chef Pig, but the kids absolutely adore it! I don’t usually put a lot of stock in educational shows or games, but this one really does seem to be encouraging Garrett to make the connection between words, letters, and sound.

It’s so very silly, and keeps Garrett in nearly constant fits of laughter. There are no words. Just lots of facial expressions and very silly antics. It’s one of the few shows that doesn’t bore Haddassah, but even so, we limit how much they are allowed to watch – otherwise, they’d watch Shaun The Sheep all day every day. I don’t care much for the show itself, but I’m fascinated by old claymation cartoons, so I even find myself stopping to watch from time to time.

This is also an old claymation production, and from the makers of Shaun the Sheep – but not quite as silly. My kids now believe the moon is made from cheese because of Wallace and Gromet. There aren’t very many episodes, at least not on Amazon Prime, but the kids are happy to start back at the beginning as soon as they finish the last one – even if I’m not quite so thrilled!

The Adventures Of Chuck and Friends

(Yup, we’re emerging from the claymation age). Garrett LOVES this show. But what little boy doesn’t love a show featuring talking trucks? It’s one of my favorites, thanks to how Chuck is always learning how to behave better. I also love how Chuck’s parents are seen as valuable mentors (in the shows I’ve watched so far), rather than the oppressive rivals that parents are so often portrayed as in children’s shows.

Old Pooh Bear never goes out of style, amiright? I was afraid that after watching the other shows listed above, that Garrett would find Winnie the Pooh boring, but a classic is a classic I guess, no matter how much slower the pace, and both kids still ask to watch it at least a few times a week.

Honestly? I find Curious George annoying, and only let them watch it occasionally. But the kids LOVE it when they do get to watch it. For Haddassah, I think it’s a matter of it being easy for her to follow along with. For Garrett, well, it seems like the sillier the show, the more he likes it.

My siblings and I loved Adventures in Odyssey when we were kids, probably because we grew up listening to the radio show. These short movies are cute, fund, and seek to teach kids biblical principals and life lessons in cartoon form. I’ll let you decide how well they do on that last point. 😉

Other shows that the kids like when we put them on, but don’t necessarily ask to watch (you know how it is) are Planet Earth, Life, Animal Misfits, and pretty much any other nature show. Garrett also really gets into cooking competition shows, all the way down to rooting for his favorite contestants. 🙂

There are a few other shows the kids like, but we don’t let them watch very many of them. For instance, Garrett use to watch Peppa Pig occasionally, and it’s very cute for the most part, but I found the portrayal of Daddy Pig to be a little off-putting. As a budding young man himself, the last thing I want for Garrett is to see men viewed as slobs of very little brain (as Pooh might say).

You may have noticed that all of these are a form of cartoon. Garrett tells me that he doesn’t like “real movies”, (meaning movies with real people) so try as I might, I haven’t been able to get him hooked on Reading Rainbow. 😛 Oh well, hopefully he’ll change his mind as he gets a little older.

And that, friends, is about as adventurous as we get with our tv shows.

Your turn: What do you kids love to watch? I’d love to know!