You are here: Home / Family / How To Strip Cloth Diapers

I don’t feel very smart right now. We all know that you have to “strip” cloth diapers every once in a while, but for some reason, I guess I just had a brain glitch in that area. 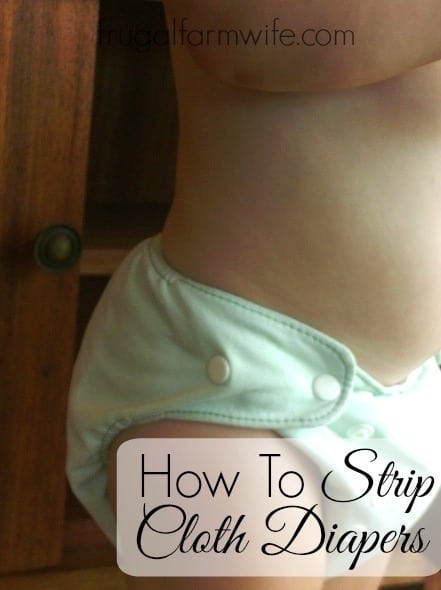 Garrett’s diapers, the ones we’ve been using for most of his life, were giving him terrible rashes. I couldn’t figure out what was going on. At first, it was just if we used them over night. I assumed that was because of the lack of breathability in the PUL

covers. Then he started getting a rash after several days of day-time cloth diapering… then it turned into a rash after one day. We used paper diapers along with various rash creams to clear things up each time, and I was ready to give up cloth diapering all together.

I decided that Garrett must be allergic to the micro-suede diaper liner because he does have sensitive skin. Now why I would think that he’d develop a sudden allergy after nearly two years of using these same diapers, I have no idea. I guess I’ve become a little jumpy about allergies.

I had always avoided the idea of stripping my diapers. Surely if I was careful to wash them properly they’d be fine, right? Stripping sounded so… involved. The instructions I’d read went something like, “lay them inside-down on the top rack of your dishwasher…” What?! I don’t have a dishwasher.

Finally though, I got desperate. Something had to be done, so I went and looked up a bunch of different methods and chose the one I liked the best. Honestly, I was very skeptical, but hey, it was worth a try.

Turns out, it was ridiculously easy, and had nearly miraculous results. we haven’t had a rash since. Not one. Except for on his inner thighs the day I let him wade around in the creek. Apparently wet PUL can give you quite a rug-burn.

How to Strip Cloth Diapers

Now, I’m not saying it’s good for the diapers, but I’d rather be a little hard on the fabric once in a while, than not be able to use them at all, so here it is.

Place all of your diapers in the wash machine, set it to the largest load possible, using hot water.

Let the diapers wash, then add 1 cup of vinegar to the rinse cycle.

Rinse at least twice more (Note: you can use cold water for subsequent rinses), and continue rinsing the diapers until there are absolutely no more suds coming out.

It works! And my diapers didn’t even come out of the wash with holes or bleach spots in them.