Our dogs love this homemade dog treats recipe, and yours will too! 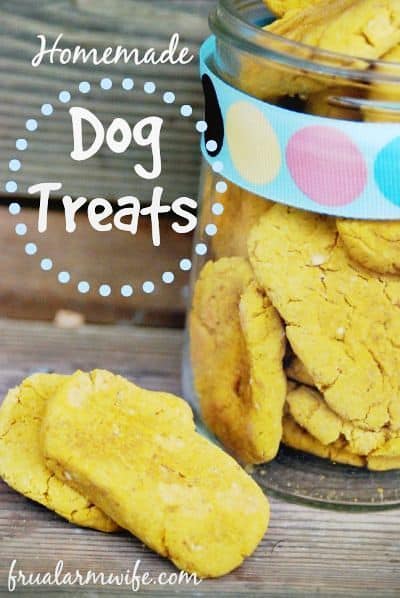 When Gabriel told me he’d gotten a new dog, I wasn’t terribly enthusiastic.

Maybe I should rephrase that.

When Gabriel told me he’d gotten a new dog, I was really annoyed.

In my opinion, the last thing we needed was yet another animal on this farm. (My opinion may have been affected by the fact that at that point, Gabriel had been out of town working for about two weeks, and the farm chores were starting to wear on me.)

Thor won me over eventually though, as sweet natured dogs tend to do. I even forgave him (mostly) for chewing up my car. (The fact that he can chew through pork chop bones like potato chips is still a little scary though.)

Garrett just loves Thor, and of course, any little boy who loves dogs wants to share his food all. the. time. Right?

Rather than seeing Thor devour prime human food, and rather than buying preservative filled treats (that I just knew my toddller would eventually get in her mouth), I decided to make some homemade dog treats.

So, since I stocked up on canned pumpkin

after the holidays last year (we like to make sugar free pumpkin pie year round), I decided to try a pumpkin based recipe.

The results? Thor LOVES them! I kept trying to take a picture of him eating one, but he wolfs them down too fast! They’re so much cheaper and healthier than pre-packaged treats (yes, I care about my dog’s health), this recipe is definitely a keeper!

Mix all ingredients together well to form a stiff dough.

Roll out on floured surface and cut with cookie cutters. Of if you’re like me, and left all your cutters at your dad’s house, roll them into balls and flatten them with greased or floured hands.

Place on an ungreased cookie sheet, and bake for 25-30 minutes, or until the biscuits are pretty much dry.

Store in an air tight container for up to a week. Not that they’ll last that long, you’re dog will eat them all.