You are here: Home / Farm Life / Gardening On The Cheap

My brother is building some really nice raised beds for mom and fam. Well, given that I just finished turning over some ground to plant peas, those raised beds looked awful nice to me. Immediately, I began devising a way we could do something similar.

It wasn’t long before I had to come back to the real world though. A buck a board plus a little diesel for hauling them and the manure may not sound like much, and I guess it’s not, but as someone who only owns three pairs of socks right now, well, it’s more than I want to spend.

After reading a few gardening articles, and looking at some of the books we have, I realized that a lot of money goes in to putting a garden together.

This is a huge deterrent as I think most of us get in to vegetable gardening to save money – not spend it.

Here are a few ideas, some of which I’ll be employing myself. 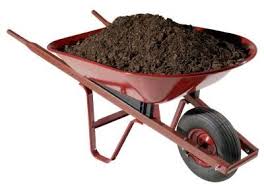 I’m in love with mulch. The initial work of laying it down is more than paid for by not having to do nearly as much weeding or watering, not to mention that it’s decomposition enriches the soil.

In the interest of keeping costs down, one of the methods we’re using in the garden this year is to cover an area with mulch, and depending on the ground underneath, the mulch will be spread over some sort of weed barrier such as newspaper, or cardboard. Where we want to plant, we’ll pull back some of the hay, and make a small pile, or row (depending on the vegetable) or dirt and/or compost, and plant in that. It’s similar to Lasagna Gardening

I hope you found some of these ideas helpful and inspiring. If you have plans to garden this year, Feel free to share in the comment section!