You are here: Home / Family / Diapering / The Cloth Diaperer’s Guide To Packing A Diaper Bag 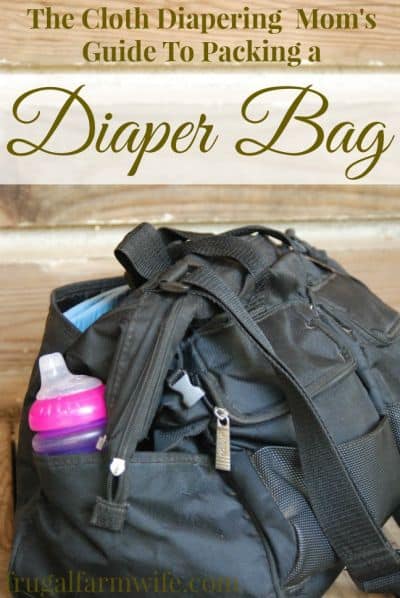 I know a lot of us cloth diaper at home, but feel like it’s too much work when we’re going out to bring cloth diapers, a wet bag for dirty diapers, and try to keep everything organized. Much easier just to take disposables and throw them away after you use them!

After a while though, especially with baby number two bringing about my determination not to buy any more paper diapers, I worked out a system that I feel works really well – for me at least – and since I’ve read a lot of cloth diapering tipps, blog posts, and even wrote a few (such as how to strip cloth diapers – that one’s important), but never once found any advice on how to pack and streamline things to make cloth diapering work in a diaper bag, I decided to share my diaper bag packing routine and how I keep it all organized and working. 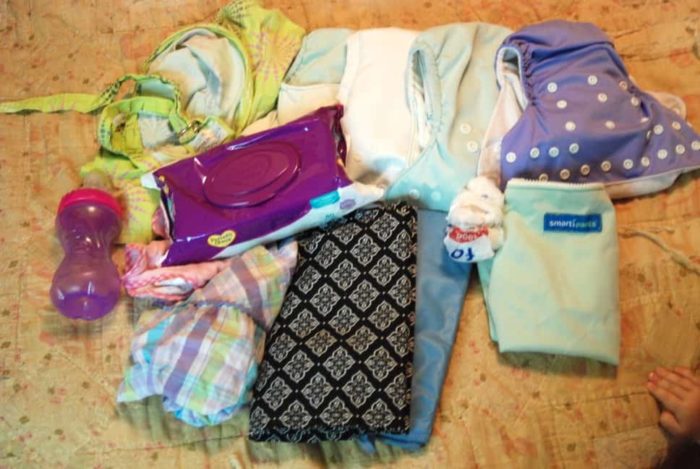 First, here are the things I pack:

Most of these things just live in the diaper bag all the time since I don’t use them at home anyway, and it makes getting ready to go a lot easier and less stressful.

The biggest difference between the cloth diapering diaper bag, and a paper diaper bag, is the additiion of the wet bag, and the method of dealing with dirty diapers, which is detailed at the the bottom of this post. 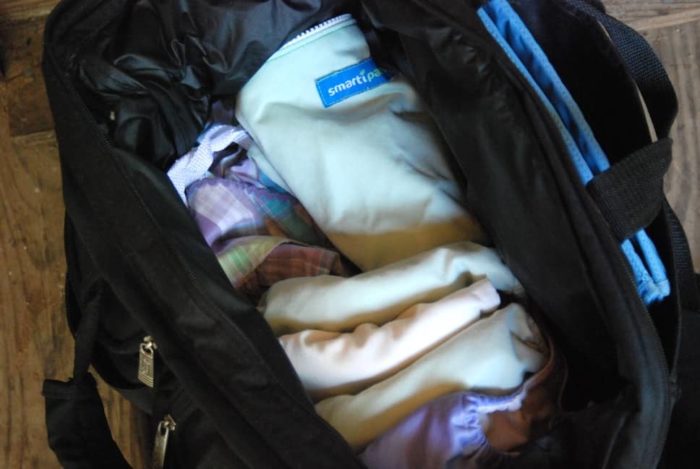 Diapers. I take 4-8 depending on how long we’ll be gone. I find it easiest to bring pocket diapers that are stuffed and baby ready with me. Occasionally I’ll take covers and flats, but it takes slightly longer to change a diaper with these, which can turn into a disaster when you’re changing a curious baby in a strange area (think holding kicking, squirming, reaching baby down while trying to snap things up with one hand).

Wipes. These are one of the items that stay in the diaper bag. They don’t actually get used very often, so a small package can last up to several months.

Wet bag and grocery bags. These are dirty diaper receptacles that are used together depending on whether the diaper is soiled, or just wet.

Changes of clothes. Honestly, we rarely need to use these, but when we do, they’re a lifesaver, and I feel really nervous leaving home without them. What if somebody has an accident, or a food spill, or finds the only spot of mud for miles around? Those things happen, so best to be prepared.

Baby Carrier. I never leave home without a baby carrier. Since my pocket sling folds up nicely and fits right into the outer pocket on my bag, it stays there all the time so that I don’t have to worry too much if we’re taking too many diapers to fit the Ergo carrier, which doens’t happen very often, but it’s still nice to have backup. 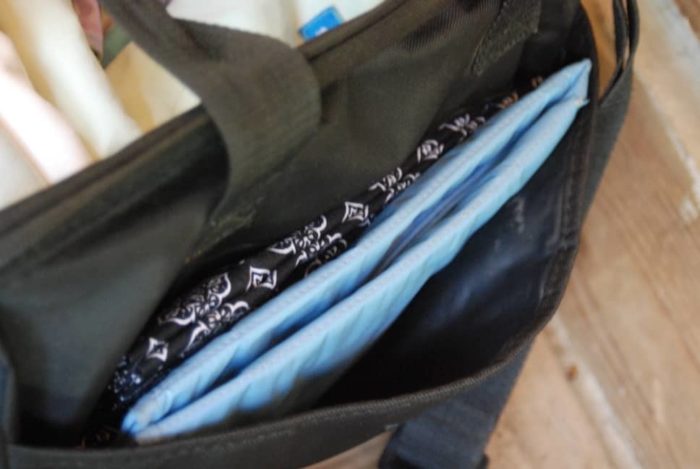 Changing pad. This is another item that fits into the outer pocket, and another that lives in the diaper bag. It’s a must have, especially for tiny babies.

Nursing cover. I don’t use this at home (but highly reccomend it away from home!), so it’s always in the diaper bag, just rolled up in the same compartment that the diapers go in.

Sippy cup and snacks. These, obviously, are taken on a case by case basis. I used to take a cup for each kid, then I realized that Garrett is perfectly capable of drinking from Hadassah’s cup, so I only needed one. It doesn’t seem like that big of a deal, but it’s one less thing to keep track of.

And, now we get to the good stuff:

How to Deal With Dirty Diapers On The Go

First, you can stick wet diapers directly in the wet bag.

If we have a stinky diapers, I wrap it in a grocery bag first so that it doesn’t come open and soil the inside of the wet bag. Then when we get home, I take the grocery bag(s) out, and if there are solids that need to be removed, I deal with that in the bathroom. Otherwise (which is most of the time), I dump them, and the rest of the contents of the wet bag directly into the diaper pail. Last of all, the wet bag goes into the pail and the bags go in the trash.

That’s me, and my method of madness. What’s yours?