Of all the gluten-free recipes we make, I have to say that pasta recipes are some of my favorite, and this chicken Alfredo pasta recipe is certainly no exception.

It’s such an easy dinner dish.

Alfredo say what?! Yes, you heard (or read) that right! 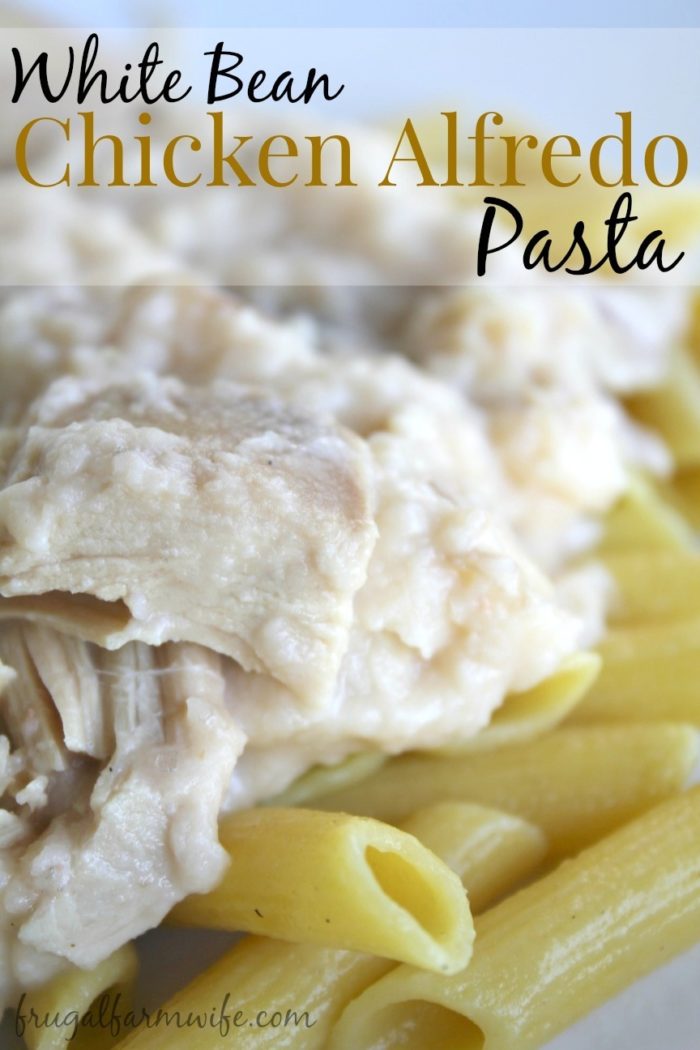 Maybe I should explain that a little bit. I like to make a large batch of white bean Alfredo sauce to freeze in meal-sized portions. Believe it or not, it freezes really well, and then it takes only a minute or two in the microwave to thaw out a quart-size Ziploc baggie to put over our pasta at lunch. Or, if you plan ahead, you can thaw it in the refrigerator overnight (but I fail at planning ahead, so microwave, or bowl of hot water it is for me).

Just note that after it’s been frozen, you’ll need to beat it vigorously to get it nice and smooth again – and impossibility if you froze chicken pieces in it… which I did… and you can see that in the next picture…. But it tastes the same, so it’s all good!

White bean Alfredo is amazing stuff. And we’ve been using it a lot more recently since finding out that my husband is allergic to tomatoes. No more marinara sauce loaded spaghetti for us!

This is a lot cheaper to make than traditional Alfredo thanks to the absence of parmesan cheese, and sooo much more nutritious. But nobody will ever know it has beans in it. It’s just that good!

Who said you can’t eat like kings (and queens) on a serious budget?!

Here, I used gluten-free penne pasta that the kids talked me into picking up during our last big shopping trip to Aldi.

Garrett is a huge “cabivoire” – he loves carbs, and isn’t a fan of more protein-rich foods, which makes me love this recipe even more because, while yes, it is fairly high carb, it’s also more protein rich than it looks like.

The bean… the shredded chicken in the sauce…. The cheese.

It’s nice to be able to serve protein that he loves!

And that was too easy. So next time, try whipping up a batch of this gluten-free egg noodle recipe to serve your white bean Alfredo sauce over for an amazing, and totally made-from-scratch dish!